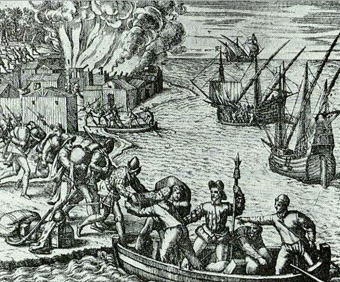 American history might have been written in French or Spanish. Here’s part of the reason it wasn’t.

In 1562 some French Protestants known as Huguenots landed on what is now Parris Island, near Beaufort, South Carolina. Like the English Pilgrims who would arrive a half century later, the Huguenots wanted religious freedom. This group, led by Captain Jean Ribault, also wanted riches: They were privateers. In an era when navies were smaller than they are today, countries hired armed private ships and crews to do much of their pillaging and plundering for them. Privateers were an accepted part of naval warfare: Under admiralty law, if captured they were supposed to be treated as prisoners of war, even if what they were doing looked like piracy.

The Huguenots were going to do their pillaging under the French Crown. After raising a stone marker on Parris Island and claiming all the surrounding land in the name of King Charles IX, Ribault sailed back to France for supplies. He left behind 28 men to establish a fort, with enough food for six months and sufficient arms and munitions for defense. The men immediately set to work building a shelter made of wood and earth, with a straw roof. They dug a moat around it and added four bastions-bulwarks from which they could defend the new settlement.   Then they waited…and waited…and waited.   But Ribault did not return. The problem: By the time Ribault reached home, France was embroiled in a full-blown religious war between Protestants and Catholics and had no money to spare for his resupply mission. So Ribault sailed on to England, hoping to find a sponsor there. Instead, he ended up imprisoned in the Tower of London by a suspicious Queen Elisabeth I.

When their supplies ran out, the abandoned men panicked. They cobbled together a ship using pine resin to seal the wood and moss to caulk the seams. Then they sewed their shirts and sheets together to make sails and begged the natives for rope to rig them. The 15-year-old cabin boy took one look at the ship that they planned to sail across 3,000 miles of ocean (with no navigator) and decided to stay with the Indians.

The would-be colonists spent more than a year at sea, much of the time drifting for lack of wind. The food they’d brought dwindled to 12 corn kernels per man a day. When that was gone, they ate their shoes and leather jackets. Then they turned to cannibalism, choosing one of their own to eat so the rest might live. Fourteen, months into their voyage, adrift and within sight of France but unable to steer what was left of their poorly built vessel, a British ship spotted them. They were rescued and taken to England.

HERE THERE BE SILVER

Two years later, Ribault’s lieutenant, Rene Laudonniere, sailed a second band of colonists to the New World. He landed at the mouth of the St. John’s River (near present-day Jacksonville, Florida), a perfect spot for attacking the galleons returning to Spain via the Gulf Stream. But while his men built a new fort-called Fort Caroline-Laudonniere discovered spoils closer at hand: gold and silver bangles jingling around the natives’ ankles.   He decided to befriend them and discover the source of their wealth. First, he promised to aid a local chief in his war with an inland rival. Then, to curry favor with the rival chief, he rescued the prisoners being held by the first chief and returned them home. Pretty soon neither leader trusted the French commander.

The same went for his own men. Tired of waiting for treasure-and food-they plotted to get rid of him. Thirteen mutineers stole some small ships, and set to sea to attack Spanish ships. Bad idea. Spain had already targeted the colonists at Fort Caroline as “a nest of pirates” and sent one of its most brutal commanders- Pedro Menendez de Aviles- to wipe them out.

By the time Menendez arrived, Ribault had been released from the Tower and returned to France. From there he went to the New World with seven ships and 500 soldiers, where he reinforced and resupplied Fort Caroline, left a small company of men to help Laudonniere guard the fort, and set sail with the rest of his crew. If all went well, he would wipe out the Spanish before Menendez could establish a stronghold. As for Menendez, he built fortifications on ground protected by water on three sides and named the new fort San Augustin (St. Augustine). Being a devout Catholic, he also prayed. He was certain that God would be on his side against the Protestant pirates.

Ribault’s ships made their way down the coast toward St. Augustine, not knowing that a hurricane thundered toward shore. While the French were battered by the hurricane, Menendez took his forces overland to Fort Caroline. He destroyed the fort and killed nearly everyone there, including the sick, the elderly, the women, and the children. Laudoniere survived by abandoning his post and fleeing with a few followers. Meanwhile, the storm blew Ribault’s ships past the inlet that led to St. Augustine and smashed them against the barrier islands. Ribault and his men survived, but had to make the 180-mile trek back to Fort Caroline on foot, only to be stymied when they reached an inlet south of St. Augustine. How would they cross?

Back from destroying the fort, Menendex and his troops were only too happy to help. They offered to ferry the French across, if they agreed to lay down their weapons and surrender. Famished and exhausted, the shipwrecked privateers let themselves be taken captive, expecting to be treated as prisoners of war. Menendez promised to do “whatever God directed him to do.” The Spanish ferried the French across the inlet a few at a time, led them into the dunes, and put them to the sword. Locals named the place Matanzas-the Spanish word for “slaughter.”

Menendez’s treachery did not go unmarked, though he justified the massacre as being done “not as to Frenchmen but as to heretics.”   Unfortunately for him, Laudonniere made it home. Soon tales of the slaughter spread across France. Dominique de Gourgues, a French nobleman, had his own score to settle with Spain. In his youth, he had been taken captive and consigned to the brutal Spanish galleys. Enraged by the massacre, he disguised himself as a slaver, equipped three ships with 200 mean-at-arms, and headed across the Atlantic.

WHO GOT THE LOOT

Spanish soldiers at the fort on the St. John’s River-renamed San Mateo-were completely fooled by the fake slavers, and saluted as de Gourgues’s ships sailed into the river. That night, de Gourgues and his men came ashore, slew the guards at their posts, and overran the garrison. They hanged Menendez’s men on the same trees Menendez had used as gallows for the French at Fort Caroline. De Gourgues posted a sign that read, “I do this not as to Spaniards nor as unto Mariners, but as to Traitors, Robbers, and Murderers.”

Historians have speculated that had the French and Spanish not been busy fighting each other for control of Florida, either country might have secured an unbreakable hold over the New World. Their squabbles most benefited another colonial power: England.