This Day in History: October 15th- From Hell 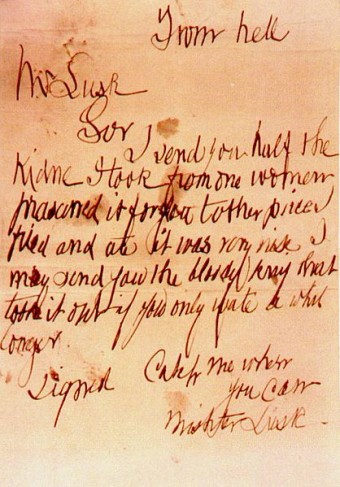 During the autumn of 1888, a murderer was creeping through the streets and alleyways of London’s East End. His victims were invariably alcoholic prostitutes. He slit their throats prior to mutilating their bodies, and in at least three cases removed several of their internal organs.

As the murders stacked up, the similarities between the crimes led the public and the police to believe the crimes were probably being committed by the same person. Letters poured into the police, some with leads about the crimes, others purporting to be from the killer himself.

Naturally, the ones claiming to be from the murderer sparked the most interest. Most turned out to be useless, although a few warranted closer inspection. On September 25, one known as the “Dear Boss” letter that arrived at London’s Central News Agency was thought to be authentic. It was signed “Jack the Ripper,” a name so perfectly fitting (he’d been known as “Leather Apron” until then) that it stuck for all time.

On October 1, the Central News Agency received more correspondence from Jack the Ripper, a postcard referring to a “double event” (prostitutes Elizabeth Stride and Catherine Eddowes were murdered the night before). He lamented the fact that he couldn’t complete the job of slicing off one of his victim’s ears. This made Scotland Yard take notice, as part of Catherine Eddowes’ ear had been severed.

Years later, a journalist reportedly admitted to writing both the “Dear Boss” letter and the subsequent postcard. (His connections as a journalist would have made him privy to information about the crimes before the general public.) There was no way to know for sure if he did, and there still isn’t, but it’s thought probable.

Then, on October 15, 1888, the most disturbing of all the Ripper letters was sent to Mr. George Lusk, the leader of the Whitechapel Vigilance Committee. The letter came enclosed in a small box along with a portion of a human kidney. Perhaps not coincidentally, Ripper victim Catherine Eddowes was missing half a kidney.

The letter read as follows:

I send you half the Kidne I took from one women prasarved it for you tother piece I fried and ate it was very nise. I may send you the bloody knif that took it out if you only wate a whil longer

Catch me when you can Mishter Lusk

The doctor who examined the kidney, Dr. Thomas Openshaw, concluded that it had belonged to an alcoholic woman in her mid-40s who suffered from Bright’s Disease, a form of kidney failure common among heavy drinkers. This description fit Catherine Eddowes to a T.

But George Lusk himself thought it was simply medical students playing a prank, who sent him organs harvested from cadavers a joke. There are those that think Mr. Lusk had something to hide and Ripperologists (yes, that’s a thing) all have vastly different opinions on the subject, and everything else to do with the case for that matter.

Most of the physical evidence associated with the case of Jack the Ripper has been lost or stolen, including the “From Hell” letter (only copies remain). At regular intervals, there’s news that the Ripper has finally been unmasked, but it seems always to coincide with a book launch and there are generally holes in the arguments made. With each passing year, it becomes more and more unlikely that the killer’s identity will ever be uncovered.