This Day in History: July 4th 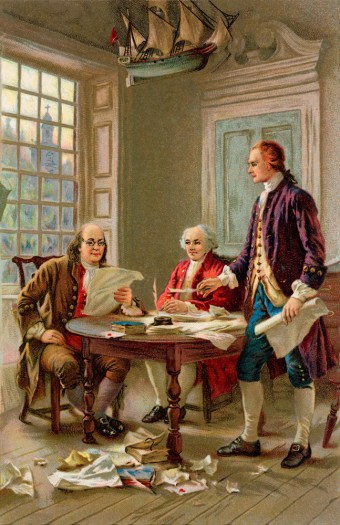 On July 4, 1826, two old friends, and adversaries, Thomas Jefferson and John Adams died within five hours of one another, and the story goes that the messengers dispatched from the men’s homes to inform each of the other’s passing crossed on their somber journey. Jefferson and Adams were the last survivors from the core group of revolutionaries that fought a war for independence from the British crown and won.

John Adams was President from 1797-1800. Thomas Jefferson was his Vice-President. The two men had worked amicably during the drafting of the Declaration of Independence, but during Adams’ term in office their differences in temperament, ideology and policy very quickly made it difficult to see eye-to-eye on virtually anything; the tension between them was almost palpable.

The loquacious and hot-tempered Adams believed in a strong, centralized federal government, while Jefferson, more laid-back and happier at his home in Monticello than the political arena, was a states-rights kind of guy. When Jefferson ran for and won the presidency in 1800 after a bitter, mud-slinging campaign, it seemed highly unlikely that the two old friends would ever speak to one another again.

But over the years the friendship they shared before their political differences came between them overcame any feelings of resentment, and both Adams and Jefferson expressed to mutual friends the respect and admiration they had for one another.

Finally, Adams broke the ice when he sent Jefferson a News Years greetings in 1812. Jefferson warmly replied with fond memories of when they were fighting off the Brits, and the two went on to regularly correspond for the remaining 14 years of their lives.

On July 4, 1826, Thomas Jefferson was at his home in Monticello, Virginia, having achieved his desire to live until the fourth so “that he might breathe the air of the Fiftieth Anniversary.” He died in the early afternoon, and his last words are traditionally remembered as some variation of “Is it the fourth?”

When John Adams awoke at his farm in Quincy, Massachusetts that morning, he said, “It is a great day. It is a good day.” Before dying in the early evening, Adams’ last words are traditionally thought to be, “Thomas Jefferson survives,” not knowing that Jefferson had predeceased him hours before.