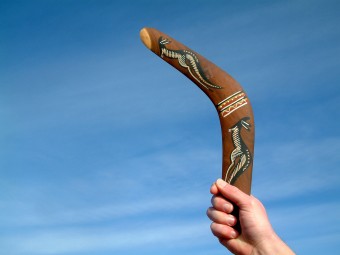 Today I found out what makes a boomerang come back.

Non-returning boomerangs have been used for at least 20,000-30,000 years, with the oldest known example carved from a mammoth’s tusk. These non-returning boomerangs were used for hunting and were carved for straight flight and to stay in the air as long as possible when thrown correctly. The hunter was then able to throw the primitive boomerang great distances and hit an animal to be eaten for dinner. These animals were often small-game, but even the likes of kangaroo or emus can be sufficiently injured by a decently weighted boomerang such that the animal can no longer outrun the hunters.

Possibly while shaping a non-returning boomerang, someone accidentally carved a boomerang into a shape that, when thrown correctly, came careening back toward the owner. It wasn’t exactly useful for hunting or warfare; it was difficult to aim; and if it actually hit its target, it wouldn’t come back anyway.

There is some conjecture that returning boomerangs could have been used for flushing certain game, but there is little in the way of actual evidence to back these claims. As such, most scholars believe that, because returning boomerangs don’t serve much of a functional purpose in hunting, they were simply used for sport, possibly first by the Australian aborigines, though Ancient Egyptians and many other cultures also made them. Tutankhamen actually had a collection of returning (and non-returning) boomerangs.

While there are numerous different ways to make a boomerang, traditionally, returning boomerangs are lightweight, made of wood, and consist of two separate wings which meet at an angle in the middle. That middle section forms the central point around which the wings will be able to spin, stabilizing the flight pattern.
So what makes a returning boomerang come back? Boomerang wings are fashioned much like airplane wings. They are flat on the bottom and precisely rounded on the top, which deflects the air such that there is less air pressure above than below.

Though not, as the common myth goes, because “When air rushes over the curved upper wing surface, it has to travel further than the air that passes underneath, so it has to go faster (to cover more distance in the same time). According to a principle of aerodynamics called Bernoulli’s law, fast-moving air is at lower pressure than slow-moving air, so the pressure above the wing is lower than the pressure below, and this creates the lift that powers the plane upward.”

Given we explicitly pointed out this was a myth, you’ve probably spotted a flaw right off the bat, in the idea that two given air molecules need to rejoin at the same time at the other end of the wing after being separated.

It is this difference in pressure between the two that causes the observed difference in air speed, not the other way around, nor some bizarre supposed physics property that requires air molecules forced apart to rejoin at the other end of the wing with the exact air molecules they previously were near. And, in fact, the air molecules rushing over the top will arrive at the back much faster than the air molecules they were previously near that go under the wing; they will not arrive at the same time. It should also be noted that further lift is created via the downwash that occurs at the rear of the wing thanks to the design and various pressure differences all coming together at that point.

Back to boomerangs, as anyone who’s ever tried to throw a boomerang knows, it’s not all about the shape. You also have to throw the boomerang correctly in order to get it to come back to you—that is, you need to throw it somewhat vertically, holding it by one wing, with the other wing pointed up (think opposite to how you would throw a Frisbee), with the centre pointing toward you. Here’s why.

You might think from this extra lift on the top vs. the bottom that a new rotation will be introduced around the center point and that it would still fly in a mostly straight line. Instead, thanks to its significant angular momentum, this is not the case. The difference in lift between the top and the bottom then creates a torque which ends up tilting the plane of rotation slightly such that the boomerang ends up flying in a curved path through the air. This is more technically known as a torque-induced precession or gyroscopic precession.

Since the torque applied here is going to be reasonably constant through the short flight of the boomerang and the angular momentum likewise stays relatively constant, the boomerang will fly in something of a cone pattern; thus, if thrown correctly and wind or the like doesn’t interfere too much, the boomerang will come right back to you. For those inexperienced with catching the boomerangs and who start out throwing a relatively heavy one, this is not always a good thing. 😉