The Jackson State Massacre of 1970 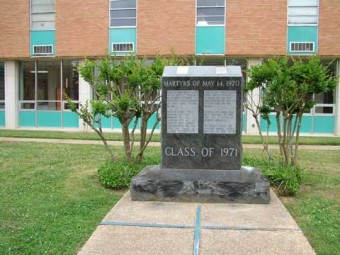 Overshadowed by the coverage of the Kent State Massacre that occurred not two weeks prior, when two people were killed and 11 injured while protesting at Jackson State College in the spring of 1970, the nation barely noticed – and today few remember.

About 4,300 black (and only five white) students were enrolled at the historically black college in Jackson, Mississippi that spring. On May 7, 1970, about one week before the fatal attack and a few days after the Kent State massacre, students had organized a protest of the United States’ “policies in Cambodia and Vietnam.”[i]

In addition to their outrage over the war and the slaughter at Kent State, the students were fed up with unequal, de-humanizing treatment: “There was the added issue of historical racial intimidation and harassment by white motorists traveling Lynch Street, a major thoroughfare that divided the campus and linked West Jackson to downtown.”

For years, in response to the aggression of white motorists, students had been hurtling objects at cars passing through campus. On the night of May 13, 1970:

Rocks were being thrown at white motorists from a crowd of about 100 persons gathered on both sides of Lynch Street . . . Most of them were students, and more than three fourths of those present were passive onlookers. . . . Jackson City Police units established roadblocks . . . to seal off the campus. The rock-throwing stopped [but] . . . the number of persons in the street [grew to] reach an estimated 700. . . . Jackson’s Mayor Russell Davis . . . requested that the National Guard be mobilized and the Mississippi Highway Patrol placed on standby . . . .[ii]

In addition to rock throwing, windshields were shattered, fires were set and young men (not all necessarily students) had “moved toward” passing motorists. Shots were fired, but no one was reported as being injured. “Sometime after midnight, the crowd gradually began to disperse. By the early hours of the morning the disturbance was over and the campus was quiet.[iii]”

The next night, May 14, 1970, tensions remained high: “A National Guard log recorded that 647 guardsmen were on duty and stationed at an armory in Jackson.”[iv]

The students were still angry and on edge when: “A rumor spread around campus that Charles Evers – a local politician, civil rights leader and the brother of slain activist Medgar Evers – and his wife had been killed.”

Enraged, the students rioted overnight, setting fires, overturning a dump truck and throwing rocks at vehicles passing on Lynch Street. First responders at the scene: “Met a hostile crowd that harangued them as they worked to contain the fire. Fearing for their safety, the firemen requested police backup [who] blocked off the campus.”

The combined Guardsmen and police were able to successfully hold off the crowd long enough for the firemen to extinguish the fires and leave the scene.

The combined soldiers and officers organized into a line to face down the protesters:

Next, all hell broke loose:

Several students allegedly shouted “obscene catcalls” while others chanted and tossed bricks at the officers . . . . Accounts disagree as to what happened next. Some students said the police . . . warned them, and then opened fire. Others said the police abruptly opened fire on the crowd and the dormitory [behind the students]. Other witnesses reported that the students were under the control of a campus security officer when the police opened fire. Police claimed they spotted a powder flare and opened fire in self-defense . . . only.

Regardless, mayhem resulted. Students fled for their lives: “There were screaming and cries of terror and pain mingled with the noise of sustained gunfire . . . . A few students were trampled.”

According to a later report commissioned by President Nixon, the shooting lasted only 28 seconds.

One of the dead was a junior studying pre-law and the father of an 18-month-old toddler, Phillip L. Gibbs. The other was a high school senior, James Earl Green, who had stopped to view the protest on his way home from his job at a grocery store – Green was found dead “behind the line of police and highway patrolmen.” Both men’s fatal wounds were caused by buckshot.

The injured were strewn across the grounds; however, according to some accounts: “The ambulances were not called until after the officers picked up their shell casings.”