This Day in History: December 20th 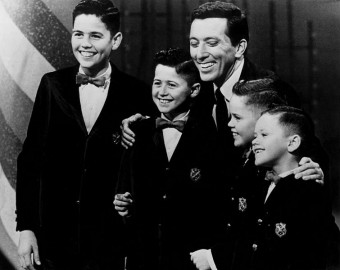 On this day in 1962, a very young, well-scrubbed barbershop quartet from Ogden, Utah, The Osmand Brothers, made the first of many appearances on Andy Williams’ popular variety show, performing “I’m a Ding Dong Daddy from Dumas” and “Side By Side.”

The original singing Osmond Brothers, Alan, Wayne, Merrill and Jay were 9, 7, 5 and 3 years old respectively when they began singing in 1958 around their hometown of Ogden to earn money to buy hearing aids for their older brothers Virl and Tom.

Within a few years, the boys’ father, George Osmond, had enough confidence in his sons’ talent to load them all in a camper and drive them west to California for an audition with Lawrence Welk. The audition didn’t pan out, and George took his disappointed sons to Disneyland in the hopes of lifting their spirits.

Performing on Main Street was the popular barbershop quartet The Dapper Dans, who took notice of the four young boys dressed in their own barbershop attire. The Osmonds asked if they might perform a tune themselves, and the Dapper Dans graciously demurred. The two groups alternated songs back and forth, much to the delight of the gathered crowd.

Everyone was highly impressed with the Osmond Brothers, and they landed a gig appearing on “Disneyland After Dark” and “Meet Me at Disneyland” during the summer of 1961. It was one of these performances that brought them to the attention of Andy Williams.

Most accounts state it was Andy Williams’ father Jay who spotted the young Osmonds on the Disney program, though others say it was his brother Don that brought the group to his attention. Either way, they were blown away by what they saw, and encouraged Andy to book these talented moppets ASAP. Andy did, and the Osmond Brothers were regulars on “The Andy Williams Show” from 1962-1969.

Working with kids is always risky. Unless the kids happen to be Osmonds. The boys were consummate pros, whose unwavering professionalism and endless rehearsing earned them the nickname “the one-take Osmonds.” They also oozed charisma, especially little Jay, who always knew where the camera was and played right to it.

Little brother, Donny, made his TV debut on the show in 1963, singing “You Are My Sunshine.” Youngest siblings Marie and Jimmy also started their show biz careers on “The Andy Williams Show.”

When the boys grew older, they wanted to play popular music and move away from their barbershop image. It was a hard sell with their old man, but they managed to pull it off, and became arguably the biggest teen idols of the early ‘70s.