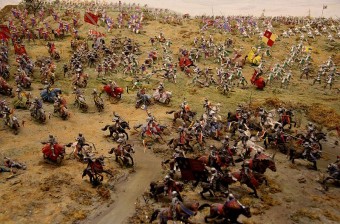 This Day In History, 1485: The Battle of Bosworth Field

The Battle of Bosworth Field was culmination of the Wars of the Roses, the civil war that engulfed England during the 15th century, which was basically a feud between two branches of the Plantagenet family – the Yorks and the Lancasters. Just two years before Bosworth, Henry Tudor, Earl of Richmond, sought exile in France after an unsuccessful uprising against the Yorkish monarch Richard III. At the end of that year, he made his intention known to wed Elizabeth of York, daughter of the late Edward IV, to bring peace between the houses of York and Lancaster. Of course, the union wouldn’t hurt his claim to the English throne any either.

By coincidence – or some thought not – King Richard’s wife Anne Neville died in the spring of 1485, conveniently leaving the King free to marry his niece. Henry knew that Richard had the home court advantage, so he gathered 2,000 men and made his way across the channel to England. He worked his way east across the country, expanding his army as he progressed and winning the support of numerous Welsh leaders along the way to boot.

By mid-August, Richard was well aware of Henry’s advancement and was ordering his own army to assemble and ready themselves. Henry, however, was attempting to stall for time as long as possible until he could muster more troops.

Another unknown variable that both sides had to take into consideration was the matter of the Stanley brothers. These three powerful siblings had enough soldiers at their disposal to give even a king pause. Maddeningly, they were notorious for remaining decidedly neutral – at least publicly – until it was perfectly clear who the victor would be in any situation.

Finally, the fateful day of the decisive battle arrived. King Richard III was flanked by the dukes of Norfolk and Northumberland, and Henry Tudor, an inexperienced warrior, entrusted the command of his army to the Earl of Oxford. The fence-sitting Sir William Stanley watched from a safe distance with great interest.

Henry was outnumbered 2:1 by King Richard’s men, so Oxford kept his men in a compact fighting wedge as they advanced toward the hill where the enemy was bombarding them with artillery fire. The two sides collided, and Oxford’s troops began to gain control of the battle. Northumberland was unable to come to Norfolk’s aid, and Norfolk was shot in the face with an arrow and killed.

With the battle in full swing, Henry Tudor figured this was a good time to try to sway Sir William Stanley into pledging his loyalty, along with his 6,000 or so men. Richard saw this going down, and decided to end the battle once and for all by taking out the Tudor usurper then and there. The King did manage to send Henry’s standard bearer and several of his body guards to meet their maker, but still couldn’t get near Henry himself.

Maybe this had something to do with the fact that the Sir William Stanley had finally decided to throw the Stanley lot in with the Tudor cause, who pushed into the fray to defend Henry. King Richard was unhorsed, but he continued to fight valiantly until he was finally mortally wounded and fell to the bloodied ground.

Legend has it that after the dust had settled, the royal crown that King Richard III had worn so proudly into battle was plucked from a hawthorn bush and placed upon the head of Henry Tudor, who that day founded a new Tudor dynasty as King Henry VII.