July 9, 2013 Deborah Honeycutt
Scott asks: What are the best ways to get rid of the itch from mosquito bites? 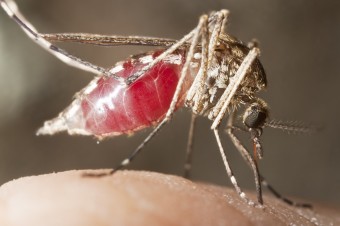 Mosquito bites.  They itch and itch and itch until you just can’t take it anymore.  Itching solves one problem, yet scratching releases more histamines in the body, which makes the bite itch more.  Those histamines are released by the body to fight off the foreign substance, the cocktail that is mosquito saliva. This ultimately results in the bite area swelling into a raised, red bump.  (Also called a wheal.)  One bite is annoying, several can be miserable, hundreds over the course of a few months can actually help you build an immunity to their saliva, but probably not the best way to get rid of the itch, due to the mosquito’s wonderful ability to spread many diseases.

So how can you get the itching to stop without contracting malaria? Trying to choose from the many commercial products, such as ibuprofen, hydrocortisone cream and anti-histamines can be overwhelming and who has time to run to the store to pick such things up anyways?  If you can wait it out, most bites stop itching within 24-48 hours.  But, why wait when you don’t have to?  Next time you become a mosquito’s target, look no further than your home for a natural remedy.  Here are some surefire ways to stop the itching from mosquito bites:

The kitchen has a few weapons to end the itchfest caused by mosquitoes, so best to start there.

If you’re striking out with these items in the kitchen, head to the bathroom:

Another interesting home remedy that many swear by?  Apply a small piece of Scotch Tape to the bite.  From here some find it works best to leave it on for a few hours-  something about closing off the air to the site reduces itching- while others simply very gently remove it directly after applying, which helps remove some of the mosquito saliva that is the heart of the itchy problem.  Best to do this as soon as possible after receiving the bite.

So those are good ways to get rid of the itch, but what about just not getting bitten in the first place?  The obvious answer there is just put on some mosquito repellent and install some screens on your windows, but I’m guessing you want more.  First, what are the chances you will be bitten?  Hard to believe, but only 1 in 10 people are highly attractive to mosquitoes for biting, though of course mosquitoes aren’t averse to sucking blood from those of us who’re less attractive… from their perspective.

Mosquitoes particularly target those who produce a large amount of certain acids, such as uric acid and octenol.  If you are a large person, your luck decreases.  A larger person gives off more carbon monoxide, which is attractive to mosquitoes.  Those mosquitoes are smart, too.  In close range, they have the ability to sense movement and heat and when you’re moving on those hot summer nights, you get hot and your sweat glands are bound to be working, making you potentially a prime target.

Beyond mosquito repellent, light those citronella candles to repel the blood suckers.  A more natural way to keep the mosquitoes away from your home is to invest in some choice landscaping.  Plants such as lavender, lemongrass, rosemary, marigolds, mint, and others are all repellants because mosquitoes hate their smell and in some cases, such as with mint, it can actually kill the mosquito if they come in contact with the oils in the plant.  Naturists also say you can crush the plants’ leaves and rub them over your clothing, just not directly on your skin.  Certainly smelling minty is much better than smelling of DEET.

Another way to keep the mosquitoes away is to get rid of any and all standing water around your house, if you can, that includes that bird fountain you love.  Mosquitoes have four stages to their life cycle: egg, larva, pupa, and adult.  During the first three stages, they live entirely in water.  During the larva stage, they feed on algae and other microorganisms and must frequently bob to the surface of the water to get air.   During the pupa stage, they do not eat, but do sit at the surface and breath air through two small tubes.  At the end of the pupal stage, the mosquitoes transform into adult mosquitoes and, after crawling to a dry place to rest and dry off, leave the water.  Thus, if you get rid of any standing water around your house, you’ll drastically reduce your local mosquito population.

Aside from the methods above that are proven to be successful, there are others that just sound plain ridiculous. My fave is using one’s fingernail to create a ‘X’ mark over the bite, and voila, the itching stops… but not really.