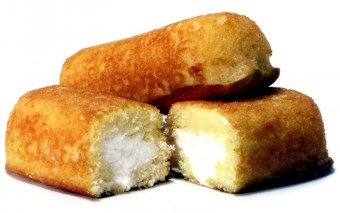 Hostess announced today that they’re shutting down operations and selling off their assets owing to a worker strike that resulted in them having to file for bankruptcy.  This means, for a little while at least, we’ll have to say goodbye to Twinkies and other delectable Hostess products. Although, it seems highly unlikely that it will be for very long on any of these products. Companies will buy the recipe and rights to Twinkies and Hostess’ other products- and, of course, there’s always the generic knock off Twinkies that will still be available, or you can make them yourself, with the author also posting an update for making the cream filling better here.  In any event, here are a few Twinkie facts for you to impress your coworkers with around the water cooler today.

1) Twinkies are only good for about 25 days (not surprising given it’s essentially sweetened bread with vanilla cream filling). So in the end, there is no sense hoarding them, though a Twinkie binge might be in order.

2) When Twinkies first came out, they had even less of a shelf life. This was due primarily to the dairy products contained in Twinkies giving them only a two day shelf life on average. This obviously cut into the profit margins. Thus, they started substituting artificial ingredients in, ultimately managing to up the shelf life to 25 days.

3) Twinkies were first thought up by James A. Dewar, the Vice President of Continental Bakeries that sold under the Hostess brand. Dewar was trying to come up with a way to utilize the machines used to make cream filled strawberry shortcake when strawberries were out of season and the machines normally sat idle.

4) In the 1980s, Hostess tried to introduce a strawberry cream filled Twinkie, but this was not successful.

5) Twinkies were originally filled with banana cream, hence the coloring and shape. We can thank WWII for the more delicious innards of the Twinkie. During WWII, bananas became scarce, so they switched to vanilla cream. After the war was over and bananas were more readily available, they didn’t switch back because people liked the vanilla cream better.

6) In 2006, Hostess briefly brought back the banana filled Twinkie as part of a promotion for the release of King Kong on DVD.

8) Among those artificial ingredients in Twinkies is cellulose gum, which gives Twinkie cream its smooth feel. Another place you can find this cellulose gum is in rocket fuel.

9) That’s not the only fuel based ingredient in a Twinkie. The chemicals that make up the artificial butter flavor are themselves derived from petroleum.

10) Another interesting ingredient in Twinkies is corn dextrin. This gives Twinkies their sticky crust. Another place you can find this wonderful ingredient is in various glues; for instance, the glue that you find on the back of envelopes.

11) Of the 39 ingredients that make up a Twinkie, only one of them is strictly a preservative, or rather, its only purpose in being included is because it’s a preservative. Some of the other chemicals in Twinkies have preserving side effects, but their use is primarily as substitutes for the dairy ingredients.

12) Despite their slightly unhealthy nature (150 calories each; with quite a dose of fat included), Hostess before shutting down churned out more than 1000 Twinkies per minute or about 500 million per year.

13) Twinkies were made by baking the Twinkie for 12 minutes; injected it with cream; flipping it over so the round bottom is now the top; then packaging for shipping.

14) According to Hostess, it takes about 45 seconds to explode a Twinkie in a standard powered microwave.

15) The Twinkies eaten in Zombieland were not real Twinkies. Being a vegan and raw-foodist, Woody Harrelson would not eat real Twinkies. Rather, the “Twinkies” he was shown eating were made from cornmeal and were vegan-safe.

16) A slang term used by reporters for a legal defense based on improbable factors like one’s diet is called a “Twinkie defense”. This first popped up in the during the trial of Dan White for murdering mayor George Moscone and city supervisor Harvey Milk. White’s lawyers argued that White suffered from severe depression and used his consumption of things like Twinkies and other junk food as a sign of his depression. (Note: you’ll often read that his lawyers argued Twinkies and junk food were the cause of his depression, but they did not do this. They merely used Twinkies and junk food to try to indicate a sign of depression).

17) The current official world record for most Twinkies eaten in 1 minute is 14 Twinkies, a record set by competitive eater Takeru Kobayashi. However, this guy managed 24 in one minute via dipping them in water first and eating 2 at a time. He should have invited the Guinness Book of World Records.

18) Nutritionist Mark Haub once went on a “Twinkie Diet” in order to see if one could eat almost nothing but junk food and still lose weight (testing his theory that weight loss is primarily tied to calorie intake, rather than what foods you eat). He stuck to an 1,800 calorie per day diet of mostly Twinkies, Donuts, Doritos, Oreos, and sugary cereals (though did drink a protein shake and took a multivitamin). In the end, his body mass index dropped from 28.8 to 24.9 and he lost 27 pounds in the 2 months he stuck to the diet, dropping from 201 pounds to 174 pounds. What surprised him, as he’d expected the weight loss from his theory, was that his “bad” cholesterol levels dropped 20% over his normal healthy diet and his “good” cholesterol levels increased by 20%. He even dropped 39% on his “bad” fat levels, such as triglycerides.