This Day In History: November 9

On this day in history, November 9th… 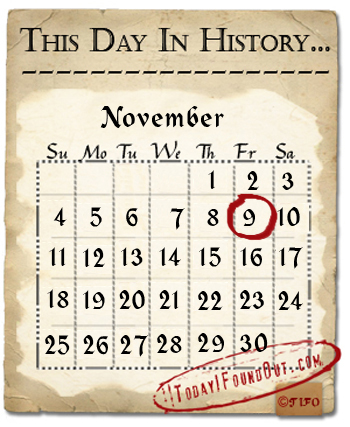 1620 : The passengers of the ‘Mayflower’ that departed from England seeking religious freedom, first sighted land at Cape Cod, Massachusetts. The ‘Pilgrims’ as they were later known as, were English Separatist Protestants who wanted to break free of the Anglican Church of England, during the reign of King James I. They believed in the Word of Jesus Christ, from the New Testament only, and that the people should be given the right to choose their own pastor and officers of the church, unlike the Catholics that vested authority in the hands of one Pope. In 1607, the Separatists escaped to the Netherlands, first in Amsterdam and later in the town of Leiden, where they hunkered down for a little over 10 years. However, because of language barriers and economic difficulties, they feared they were losing their identity and heritage in Holland. They wanted to move into the New World and establish a Colony in Virginia, along the Hudson River. On September 6, 1620, about 50 Separatists (known as The Saints), along with others (the non-separatists they referred to as ‘The Strangers’), and the crew made up over 102 people that set sail from Plymouth, England on board the Mayflower (a cargo ship). After a grueling voyage of 65 days and severe conditions that forced them way off-course, the ship sighted land, which was Cape Cod, Massachusetts. (More coming up in This Day In History: November 11)

1729 : Spain, France and Great Britain ended the Anglo-Spanish War, the signing of the Treaty of Seville. In the Anglo-Spanish war, Spain lost Gibraltar to an Anglo-Dutch fleet in 1714. With the support of Austria, Spain wanted to recapture Gibraltar from the British. So, in 1727, the Spaniards fought a four-month siege to get the city back expecting material help from Austria , but were unsuccessful. It turns out that the British had a secret deal with the Austrians to prevent them from getting involved. This infuriated Spain and began a lot of hostility between the two nations. Ultimately in  1728, they called a truce, which was finally made formal in a negotiated peace agreement, signed in Seville.

1938: The Nazi’s started a new  anti-Semitic campaign of terror dubbed “Kristallnacht” (Night of Broken Glass), the unofficial beginning of the Holocaust. Prior to this incident, the Nazi policies (under the rule of Adolf Hitler) against Jews had been predominately non-violent, although not subtle. On November 7th,  a 17-year-old Herschel Grynszpan, a German-born Polish Jew living in France, retaliated for the unjustified deportation of his parents along with 12,000 other Polish Jews from Germany to Poland. He assassinated the German (Nazi) diplomat Ernst vom Rath, at the German Embassy in Paris in protest to the injustice against Polish Jews. Following this,  Joseph Goebbels (Nazi Minister for Propaganda) along with Hitler’s support used the assassination to rile up an anti-semantic frenzy among Hitler’s supporters across Germany. On the 9th, continuing into November 10th, the Nazi’s (including German storm troopers disguised as “spontaneous demonstrators”) carried out a series of coordinated attacks that included torching and vandalizing Jewish homes, businesses, schools and synagogues. The result, over 100 Jews were killed, more than 7,500 Jewish businesses damaged, 200 plus synagogues burned/ destroyed,  and an estimated 30,000 Jews arrested and sent to concentration camps. They even fined the Jews 1 billion marks (or $400 million in 1938 dollars) for Ernst vom Rath’s death and as payment seized their property and kept the insurance money from damages. The Kristallnacht caused over 100,000 Jews to flee Germany.

1967:  Rolling Stone Magazine launched its first issue with John Lennon on the cover. Jann Wenner (Chief Editor & Founder) started the magazine with $7,500 borrowed from his friends, family and fiancée at the time. Named after the 1950 Muddy Waters song “Rollin’ Stone”, Jann wanted his magazine to be, not only about the music, but about all the things and attitudes that music embraces. The first issue was published in Tabloid newspaper format, with a picture of  John Lennon on the cover taken on the set of the movie he was filming at the time, ‘How I Won The War’.

tagged with november 9th, this day in history