On this day in history, November 22nd… 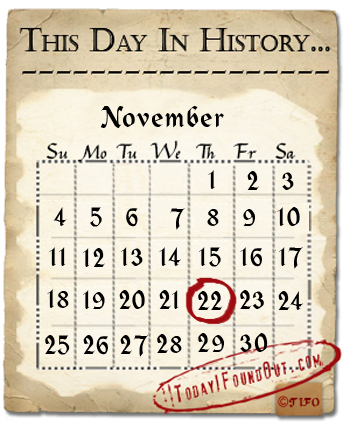 1963 : President John F. Kennedy, was fatally shot while traveling with his wife and others in a Presidential motorcade through Dealey Plaza in Dallas, Texas. The President was traveling in Dallas in an open-top convertible along with his wife Jacqueline Kennedy, the Texas Governor John Connally, and his wife, on a route that was planned to give him maximum exposure to the crowds. As Kennedy waved to the crowds, he was hit in his upper right back by a bullet, thought to be the second or third one fired, and in a matter of seconds another shot entered the rear of President Kennedy’s head.  At one point the President’s wife Jackie was said to have crawled out onto the trunk of the car to reach for something (believed to be a piece of her husband’s skull). Governor Connally, who was riding in the front with his wife, was reported to have gotten injured by the same bullet that first hit Kennedy. Lee Harvey Oswald (a former U.S Marine) shot and killed a policeman who questioned him on the street, roaming near his house in Dallas less than an hour after the President’s assassination. Thirty minutes after that, he was arrested and became the number one suspect for the President’s shooting. Unfortunately, Oswald never made it to the trial as two days after the incident, while being transferred from the police station, a nightclub owner, Jack Ruby, emerged from the crowd, shot, and killed him.

1977 : Concorde flights started to New York. Concorde was the first supersonic passenger-carrying commercial airplane built jointly by aircraft manufacturers ‘British Aircraft Corporation’, in Great Britain, and Aérospatiale, in France. The aircraft they came up with had delta-wings and was powered by 4 turbojet engines. It also featured a slender fuselage  and a droop-nose section for better landing visibility. While an average commercial jet took approximately 8 hours to fly from Paris to New York, the supersonic Concorde cut the transatlantic travel time to less than half (under 3.5 hours) as it travelled at twice the speed of a conventional commercial aircraft. The first Concorde flights operated by British Airways and Air France began in  January 1976, between London and Bahrain, and between Paris and Rio. The U.S at the time had banned Concorde landings because of protests over sonic booms. However, they finally allowed them to start services to Washington D.C in May of 1976, but New York continued to ban Concorde. The truth of the matter was that the Air Force One aircraft at the time, a Boeing VC-137, was actually louder than the Concorde at subsonic speeds as well as during takeoff and landing. The ban was finally lifted by the  Supreme Court in 1977 which is when they scheduled flights from Paris and London to New York’s John F. Kennedy airport.  Unfortunately, the high cost of operations with its limited passenger numbers, plus rising maintenance costs , led both airlines to cut down their routes to just the New York sector, ultimately retiring the Concorde altogether in 2003.

1986 : Mike Tyson became the youngest Heavyweight champion in boxing history.  Born in Brooklyn, New York , Tyson had a rough childhood and grew up in and around high-crime neighborhoods. By age 13, he had been arrested 38 times for petty crimes and fighting. Tyson learned boxing from juvenile detention center counselor and former boxer, Bobby Stewart. Stewart referred him to boxing manager D’Amato, who got him out of reform school and into full time training at 15. Tyson competed at the Junior Olympics in 1981 and 1982, where he won two gold medals, but only started his professional boxing career when he turned 18. Before his heavy weight champion title win, Tyson had won all 27 of the matches he’d fought, knocking out 26 of his opponents. So it was no big surprise when the 20-year-old Tyson knocked out 33-year-old Trevor Berbick in just 5 minutes and 35 seconds to become the youngest titleholder ever. Tyson kept the title 9 more bouts until Buster Douglas beat him in 1990.