This Day In History: November 19

On this day in history, November 19th… 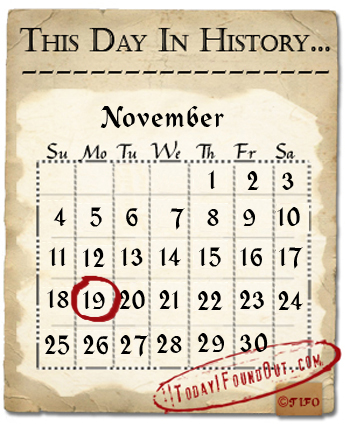 1863 : American President Abraham Lincoln, gives the one of the best-known speeches in American history, the Gettysburg Address. Around four and a half months prior to the address, one of the bloodiest battles of the Civil war took place in Gettysburg Pennsylvania. Often described as the turning point in the American Civil war, the Battle of Gettysburg had the largest number of casualties in the war.  Over 46,000 men from both sides were killed, injured, captured or went missing over the course of the three-day battle. The battle ended with the defeat of the Confederate Gen. Robert E. Lee’s Army of Northern Virginia. An attorney by the name David Wills came up with the idea for a Soldiers’ National Cemetery at Gettysburg and with the approval of Pennsylvania’s Governor Andrew Gregg Curtin, he was appointed the head of the project. They bought and converted 17 acres of pasture into a cemetery for those who died in the Battle of Gettysburg. He organized for the famous orator Edward Everett, to deliver a speech at the consecration. Just two weeks prior to the cemetery’s dedication, he also invited Abraham Lincoln to say a few words after the oration. On November 19th, 1863, after the Everett’s long and detailed speech, as was requested of him, Lincoln made “a few appropriate remarks”.  In Lincoln’s short (it was about 2-3 minutes long) but eloquently delivered address of under 300 words, he summarized the war brilliantly and movingly reminded the war-weary public that the war was not a fight to save the Union, but a struggle for freedom and equality for all.  Although the exact wordings of the speech are still disputed, the Bliss version that Lincoln signed himself is generally accepted as the final draft and standard text. It states:

1881 : A large meteorite fell near the village of Grossliebenthal near Odessa in Ukraine. It was reported to the French Academy of Sciences that around 7a.m on the 19th of November, residents of the town of Odessa in Ukraine saw  what was described as  “a bright and serpentine trail of fire” in the sky above their town. An editor of an Odessa newspaper was intrigued by the phenomenon which he believed to be falling meteorites; the editor offered a reward to any person who could bring him the fallen meteorite rock. Three days later, a resident of the town of Grossliebenthal near Odessa brought him an 8 kilogram (about 17.5lbs) meteorite that had frightened a peasant while he was in his field. The peasant witnessed the falling meteorite and said that he had to dig about .35 meters (a foot) in the ground to retrieve it. The editor also learned of another piece of the meteorite that landed at the same time near the post station of Sitschawska 42 km North-west of Odessa, which was said to had hit a postilion. The people, however, broke it up and distributed fragments of the meteorite as talismans. Furthermore, there were reports from the town of Elisabethgrad, 265 km from Odessa that a “luminous trajectory was seen, slightly inclined to the horizon, and  traveling south-south-west”, which is probably the same meteorite that passed over Odessa.  The meteorite was named the ‘Grossliebenthal meteorite’ and is said to have a rough polyhedric form.

1969 : Brazilian Soccer legend Pelé scored his 1,000th professional goal.  Dubbed as one of the greatest soccer players of all time, Pelé (whose real name is Edison Arantes do Nascimento) was first scouted by  football star Waldemar de Brito and began playing for  the major league Santos Football Club in Sao Paulo, Brazil at age 15. A year later, he began playing for the national team and at 17, he led Brazil to win the World Cup against Sweden by scoring 2 goals. There was no stopping him and he soon became the top scorer in the league and a national hero; so much so, that in 1961, President Janio Quadros had Pelé declared a national treasure. This prevented him from being transferred out of the country for over two decades, despite the fact that he had numerous offers from European clubs. His 1,000th goal  was a huge milestone in his career and he scored it against  Vasco da Gama, from a penalty kick at the Maracanã Stadium.  A strong advocate to improving the social conditions of the poor in Brazil, he dedicated his 1,000th goal to the poor children of Brazil. In the 1363 games Pelé has played (including friendly club matches), he has scored a record 1280 goals.

1998 : The last self portrait of the famous artist Vincent van Gogh, titled “Portrait de l’artiste sans barbe ” or “Portrait of the Artist Without Beard ” sold at an auction in New York for US $71.5 million, making it one of the most expensive paintings of all time. The Dutch artist painted the 1889 self-portrait after he had shaved and gifted the painting to his mother for her 70th birthday, not long before he committed suicide in 1890. In 1998, the Van Gogh painting was one of 10 paintings put up for auction by the heirs of Jacques Koerfer, a German-born collector and the former chairman of the BMW  who had died in 1991. The highest bid for the painting reached, almost three times its high estimate at $71.5 million. The buyer remains anonymous even today.

tagged with November 19, this day in history