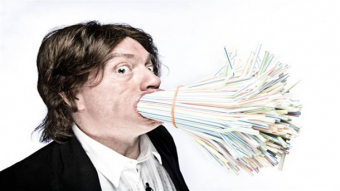 If the Olympics reminds us of anything, it’s that it’s incredibly enjoyable to watch human beings who’ve dedicated their lives to achieve what are essentially pointless records in the grand scheme of things go out and achieve them (or fail, as the case is for most).

In celebration of this human desire to do meaningless things that no human has done before, and to spend millions of man hours watching people make the attempt, here are 15 bizarre world records, with 10 more at the jump: