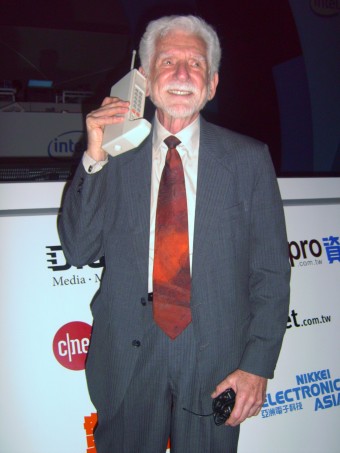 As Cooper stated, “As I walked down the street while talking on the phone, sophisticated New Yorkers gaped at the sight of someone actually moving around while making a phone call. Remember that in 1973, there weren’t cordless telephones, let alone cellular phones. I made numerous calls, including one where I crossed the street while talking to a New York radio reporter – probably one of the more dangerous things I have ever done in my life.”

After demonstrating the phone to the press while standing on Sixth Avenue in New York City, calling Engel and others, Cooper then let a few members of the press use the phone to show that it would work for making calls to anyone.

The handheld phone used on this historic call was a prototype developed by Cooper and his team of engineers in just 90 days.  It comprised of the handheld unit itself, which was 9 x 5 x 1.75 inches,  then a base station on the roof of what is now the Alliance Capital Building in New York City. The base station was in turn connected to AT&T’s telephone system.

You’ll often read that this was the first ever handheld mobile phone call, but this isn’t correct.  The unit was tested thoroughly before the public demonstration with the press. Funny enough, supposedly the first ever actual test of this prototype resulted in the tester accidentally calling the wrong number.

Cooper also demonstrated the device to the FCC before it was publicly unveiled.  Motorola was trying to convince the FCC to allocate frequency space for cellular communications to be available to private companies.

This first handheld cell phone had only 20 minutes of battery life when talking, but as Cooper stated “that wasn’t really a big problem because you couldn’t hold that phone up for that long.” (The phone weighed 2.4 pounds.)  Once the phone battery was drained, it took 10 hours to charge back up fully. 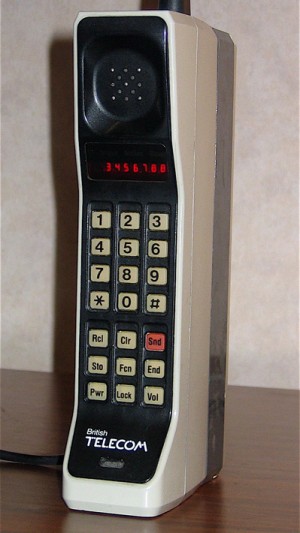 While the prototype only took 90 days to make, the commercial phone that resulted from it took much longer to finalize and bring to market, as one might expect given the infrastructure that was needed to support it.  As such, it was a full 10 years later before the first commercial cell phone, the DynaTAC 8000x (“Dynamic Adaptive Total Area Coverage”), hit the market on March 6, 1983.  This phone weighed only 1.1 pounds, had 30 minutes of battery life (8 hours of standby), and was initially priced at $3,995, which is about $9300 today.