The Natural Color of Rubber is White 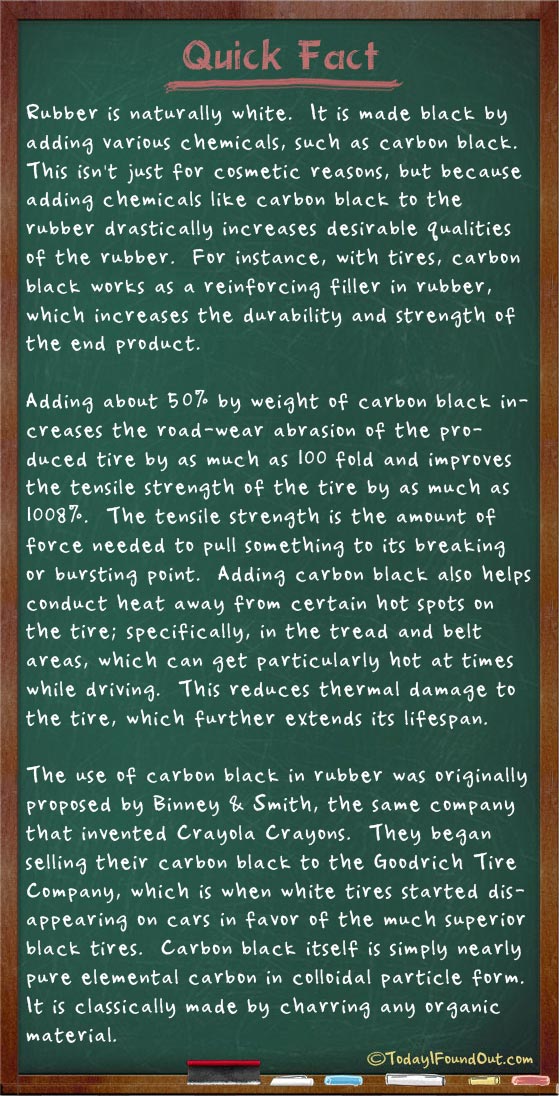 Rubber is made black by adding various chemicals, such as carbon black.  This isn’t just for cosmetic reasons, but because adding chemicals like carbon black to the rubber drastically increases desirable qualities of the rubber.  For instance, with tires, carbon black works as a reinforcing filler in rubber, which increases the durability and strength of the end product.

Specifically, adding about 50% by weight of carbon black increases the road-wear abrasion of the produced tire by as much as 100 fold and improves the tensile strength of the tire by as much as 1008%.  The tensile strength, for those who don’t know, is the amount of force needed to pull something to its breaking or bursting point.  Adding carbon black also helps conduct heat away from certain hot spots on the tire; specifically, in the tread and belt areas, which can get particularly hot at times while driving.  This reduces thermal damage to the tire, which further extends its lifespan.

The use of carbon black in rubber was originally proposed by Binney & Smith, the same company that invented Crayola Crayons.  They began selling their carbon black to the Goodrich Tire Company, which is when white tires started disappearing on cars in favor of the much superior black tires.  Carbon black itself is simply nearly pure elemental carbon in colloidal particle form.  It is classically made by charring any organic material.