Lighters Were Invented Before The Match

October 19, 2011 Jon
Note: This is a guest article contributed by frequent TIFO visitor and owner of DumpADay.com, Jon. 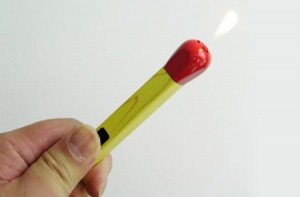 Today I found out that lighters were invented before the match.

This one had me scratching my head for a bit.  There are several sites out there that say the match came first.  However, by definition of the “match”,  they are incorrect.  The match they are referring to, the one they say came before the lighter, was nothing more than sticks (not tooth-pick size, but actual sticks, they found laying around) soaked with a flammable chemical for easy lighting later with tinder.  The sticks then burst into flame when you provided sparks or fire by some other means.  So when someone tells me that matches were invented in Northern China in 577, I’ll say, “define Match.”

So what about the lighter?  They were invented in the 16th century out of nothing more than a converted flintlock pistol.  Now you can argue that a pistol is no lighter.  This is true.  But if you look up the definition of “Lighter” in the dictionary, it states; “A mechanical device used in lighting fires, cigarettes, cigars, or pipes.”  So by definition, the converted pistol was indeed the first lighter.

I know what you are thinking,  “What does the definition of “Match” say…   It states, “a slender piece of wood, cardboard, or other flammable material tipped with a chemical substance that produces fire when rubbed on a rough or chemically prepared surface.”  Sure they had sticks coated in a flammable substance, but they didn’t rub it to light it; they had to provide the flame or sparks to light it.  So it was simply an easier way of making fire than just lighting a stick not chemically coated.

So now that semantic controversy is out of the way, here are some match and lighter facts.