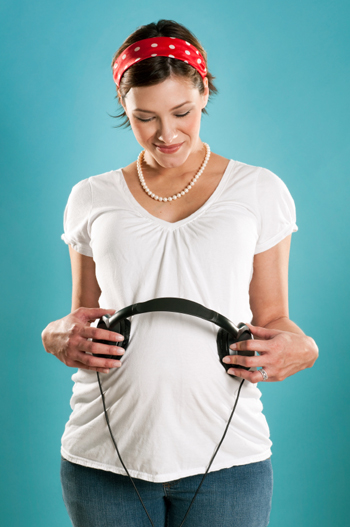 Today I found out that babies are able to remember melodies they hear while inside the womb for up to a year.

Recent research at the University of Leicester demonstrated that babies showed a significant preference for melodies played for them frequently during the last few months they were in the womb.  Preferences for a familiar melody were shown by babies in a variety of ways including: looking towards the source of the music and by the soothing effects of these pieces of music on the babies, such as their heart rates slowing down significantly upon hearing the tune and the baby calming externally.  These same effects were not typically observed when songs were played that the baby had not heard in the womb.

While many people would believe that classical music would be the best choice to play for the growing fetus, in general, babies don’t seem to show any preference for music style.  Further, the myth that playing classical music, such as Mozart, will increase your baby’s intelligence has been thoroughly debunked.  So there is no general reason to pick one style of music over another.

Not surprisingly, the sound of their mother’s voice has been shown to have the same soothing effect on babies as does music played for them while in the womb for similar reasons. Interestingly though, even while still in the womb, the voice of the mother has been shown to calm the baby.  In addition to this, as soon as thirty two weeks after conception babies have been observed, via ultrasound, to react to their mother’s laughing by “bouncing”.