What a White Dwarf Is 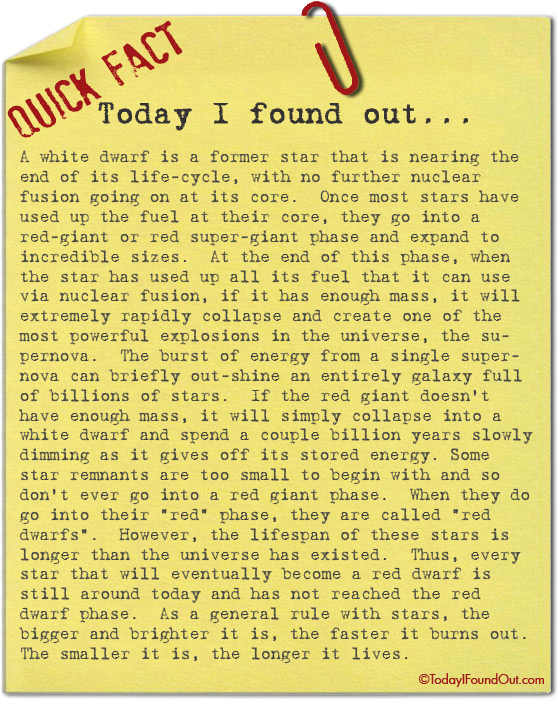 A white dwarf is a former star that is nearing the end of its life-cycle, with no further nuclear fusion going on at its core.  Once most stars have used up the fuel at their core, they go into a red-giant or red super-giant phase and expand to incredible sizes.  At the end of this phase, when the star has used up all its fuel that it can use via nuclear fusion, if it has enough mass, it will extremely rapidly collapse and create one of the most powerful explosions in the universe, the supernova.  The burst of energy from a single supernova can briefly out-shine an entirely galaxy full of billions of stars.  If the red giant doesn’t have enough mass, it will simply collapse into a white dwarf and spend a couple billion years slowly dimming as it gives off its stored energy. Some star remnants are too small to begin with and so don’t ever go into a red giant phase.  When they do go into their “red” phase, they are called “red dwarfs”.  However, the lifespan of these stars is longer than the universe has existed.  Thus, every star that will eventually become a red dwarf is still around today and has not reached the red dwarf phase.  As a general rule with stars, the bigger and brighter it is, the faster it burns out.  The smaller it is, the longer it lives.