Why People Get Goose Bumps 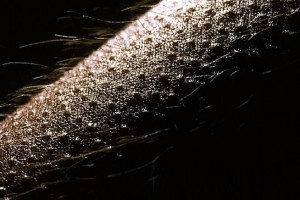 Today I found out why you get goose bumps when it’s cold or as result of a strong emotion.

It turns out, goose bumps are an involuntary reflex of mammals called piloerection, usually triggered by a hormone released on certain situations that causes their body hair to stand. With time, humans have evolved to have less body hair, so what we see during certain situations such as a temperature drop or strong emotions are goose bumps on the skin rather than standing hair.

So how are goose bumps formed? The reflex brought on by stimulus such as cold, fright or strong emotions – fear, admiration, sexual arousal, awe, etc. causes an involuntary discharge from the sympathetic nervous system which responds to stimulus we may not be consciously aware of, and in turn triggers contraction of the little arrectores pilorum muscles (the arrector pili are extremely small muscle fibers that are attached to each hair follicle on your body). 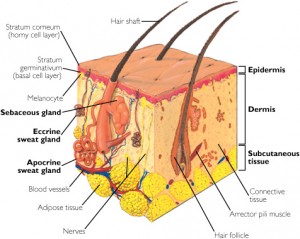 This discharge causes contraction of the hair erector muscles (arrector pili). Each contracting muscle creates a shallow depression on the skin surface so the surrounding area protrudes. That is why the hair follicles elevate above the rest of the skin and goose bumps appear.

The reflex of goose bumps is known as the piloerection or horripilation and occurs in many other mammals. The main reason though for goose bumps is the subconscious release of a stress hormone adrenaline. While in animals ,  this hormone is released as a fight-or-flight reaction to cold or stressful situation, in humans adrenaline may be also be released during strong emotional reactions such as excitement.

tagged with goosebumps, how are goosebumps formed, what causes goose bumps, why do we get goosebumps