The Fear of Being Buried Alive is Called ‘Taphophobia’ 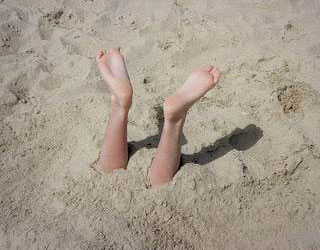 Today I found out that the medical term for the irrational fear of being buried alive is called Taphophobia, also occasionally spelled Tephephobia, which means the same thing.    Taphophobia derives from the Greek “taphos” meaning “grave”.

Today, this would be considered a somewhat irrational fear.  However, it wasn’t too long ago that this wasn’t irrational at all.  Taphophobia hit it’s peak in the 18th and 19th centuries.  Indeed, in 1896 T.M. Montgomery, who was supervising the disinterment of remains at the Fort Randall Cemetery, reported that a little over 2% of those bodies exhumed were definitely victims of being accidentally buried alive.  In other words, about 2% woke up, tried to claw their way out, and were unable to do so.  Given the oxygen supply in a coffin doesn’t last that long, it is likely the actual percentage of people buried alive was higher, when you include the ones who didn’t wake, but were still technically alive when buried.

The reason the rate of being buried alive was quite high in the 17th and 18th centuries was primarily due to the high number of people dying of various diseases like cholera, smallpox, etc.  These people tended to not get a close investigation to make sure they were really dead, rather than just passed out, and they also tended to be buried quickly to prevent the spread of whatever disease they were thought to have died from.  In the 17th century, William Tebb compiled 219 instances of narrow escape from premature burial; 149 cases of actual premature burial; 10 cases in which bodies were accidentally dissected before death; and 2 cases in which embalming was started on the still living.

Buck up though, these days getting accidentally buried alive in “civilized” nations should be exceptionally rare, due to medical advances and the simple fact that most people opt to have the bodies of their deceased loved ones embalmed before burial.  The embalming process involves first double checking the person is really dead, then a somewhat lengthy process of injecting embalming fluids into your body, which is sure to kill you if you weren’t dead already.

One famous case of an embalming death in 1837 was of Cardinal Somglia, who had taken ill and passed out.  Because he was a very important church official, preparations to embalm him were made.  When the surgeon cut into his chest to instill embalming materials, he saw that the cardinals heart was still beating.  At this point, the Cardinal himself woke up, but died shortly thereafter from the incision in his chest.

If you are still worried about being buried alive, despite modern advances to be able to detect when someone is dead and having to live through the embalming process, then a ‘safety coffin’ is for you.  These coffins are specifically designed to either allow the person in the coffin to get out, if they are still alive, or, more commonly, are designed to give the person in the coffin the ability to alert the outside world of the fact that they are still alive.

One of the first of these Safety Coffins was designed by Count Karnice-Kacrnicki.  He was inspired to design a coffin like this when he was thoroughly shaken up upon attending the funeral of a certain little Belgian girl.  Upon being lowered into the dug hole and dirt starting to be placed on her coffin, the little girl apparently woke up and starting screaming.  She was taken out of the coffin and found to be completely fine.

The Count then set out to design a coffin that allowed a person accidentally buried alive to summon help.  The coffin had a tube 3.5 inches in diameter extending to a box on the surface.  The tube was attached to a spring loaded ball sitting on the corpses chest.  Any movement of the chest would release the spring, opening the box lid and admitting light and air into the coffin.  A flag would then spring up on the surface and a bell would ring continually for a half an hour; in addition to this, a lamp would light and stay lit for about a half hour in the case of the movement happening at night.

Loads of other such safety coffins have been designed since then and the practice still goes on today, even though to date there has not been one record of any safety coffin being used successfully, in terms of a person being buried alive in one and eventually using it to survive the ordeal.  Although, one of the inventors of a safety coffin was buried alive after a motorcycle accident.   He was exhumed a few days later due to an insurance investigation.  When he was dug up, his body was found to still be warm.  He was later revived and went on to invent his own safety coffin equipped with a toilet, radio transmitter/receiver, food locker, a few books, and a light, as well as enough room for the buried to sit up.