Does McDonald’s or Burger King Really Hand Out Cards Granting You Free Food For Life?

June 5, 2017 Karl Smallwood
Jack A. asks: Is it true that McDonalds gives out special cards that give you free food for the rest of your life? If so, how do I get one? 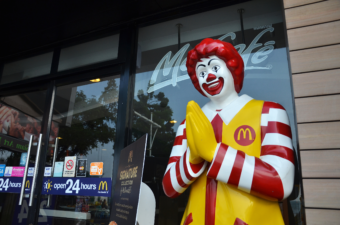 Like the American Express Centurion Card – a hyper-exclusive charge card only gifted to the wealthiest of individuals – there exists equivalently exclusive cards issued by both McDonald’s and Burger King granting the bearer unlimited free food for life from any establishment of the respective chain that issued them. So who on Earth is lucky enough to own such a card and how would you possibly go about getting one yourself?

Starting with McDonald’s- the company has given out cards, or at least pieces of paper, granting people free food ever since Raymond Kroc joined the McDonald’s brand in the 1950s. (See: Who is the McDonald in McDonald’s?) You see, in the earliest days of his leadership of the chain, Kroc would occasionally informally sign and gift Be Our Guest coupons to customers that were valid for a lifetime of free food (sometimes restricted to specific food items on the menu) from any McDonald’s restaurant in the world. As you might expect, as the chain rapidly grew, the value and utility of these coupons quickly skyrocketed.

According to Mitt Romney (yes, that Mitt Romney), his father was given such a coupon from Kroc after they worked together briefly in the restaurant chain’s early days. His particular coupon specifically granted the bearer with unlimited hamburgers, shakes, and French fries at any McDonald’s. McDonald’s themselves eventually confirmed the authenticity of Romney’s anecdote, but noted that they had no record of why exactly Kroc saw fit to give away a lifetime supply of those particular menu items to Romney’s father.

According to Romney, the coupon was printed on a piece of pink paper and it was always honored at every McDonald’s his father ever used it at, even though his dad told him that often nobody working at the restaurants had heard of such a thing previous to him presenting it.

Exactly how many of these coupons Kroc gave away and how many are still floating around today isn’t clear, as even McDonald’s archivists have admitted that they only know that Kroc would give them away as gifts to “various people over the years”.

In more modern times, the company has taken to handing out actual official gold cards to people that entitle them to free food. These cards may be limited to use in a single restaurant, a selection of restaurants owned by a specific franchise holder, or in some case good worldwide. They can be given away either by the franchise owner themselves or the company, with the lifespan of the cards anywhere from a year to a lifetime.

Notable people to hold (or have held) such a card include Charles Ramsey, who in 2013 famously ditched a half eaten Big Mac to help rescue three women who had for years been held captive and brutalized by one Ariel Castro, in a shockingly horrific case that came to be known as the Ariel Castro Kidnappings. The company, according to a spokeswoman, felt “compelled” to reward Ramsey after being flooded with recommendations from people that they should somehow acknowledge his heroics and the free advertising his viral interview that included mention of the Big Mac gave them. Ramsey’s gold card apparently granted him free food from local McDonald’s restaurants for a single year, with several restaurants in his home town of Ohio eventually offering to make it a lifetime pass.

A more famous holder of a lifetime card from McDonald’s is billionaire Warren Buffett, whose personal McDonald’s card grants him free McDonald’s anywhere in Omaha for the rest of his life. Buffett is so fond of the card that he claims it’s one of the few things he keeps in his wallet at all times and that “that’s why the Buffett family has Christmas dinner at McDonald’s”. The thrifty billionaire notes that the card is, practically speaking, nearly as good as one valid worldwide as he rarely leaves Omaha for extended periods. He also states he has a similar Johnny Rockets’ restaurant card that gives him and up to three guests the same perk, though he didn’t say whether this was for life.

According to Bill Gates, when Buffett does leave town and happens to eat at McDonald’s, he comes loaded with more everyday coupons. This little anecdote was revealed in the Bill and Melinda Gates 2017 annual letter in which Mr. Gates states,

Remember the laugh we had when we traveled together to Hong Kong and decided to get lunch at McDonald’s? You offered to pay, dug into your pocket, and pulled out…coupons! Melinda just found this photo of me and “the big spender.” It reminded us how much you value a good deal. That’s why we want to point you to this number, 122 million. Saving children’s lives is the best deal in philanthropy.

Speaking of Bill Gates, Buffett claims his good friend Mr. Gates holds the coveted McDonald’s gold card as well, but entitling him to free food forever worldwide. As far as we can find, if true, this makes Bill Gates the only publicly known person to have such a lifetime, worldwide McDonald’s gold card, though of course it seems likely more people probably hold one and have simply never mentioned it. In fact, we couldn’t even find anywhere where Bill Gates himself confirmed that he holds such a card, but presumably Mr. Buffett wouldn’t just make something like that up. Also presumably Gates was not yet the bearer of such a card when the pair were eating at the aforementioned Hong Kong McDonald’s, lest there would have been no need for Buffett’s coupons.

You might at this point wonder how much food you can get per visit with the McDonald’s gold card. Well, seemingly as much as you want (though presumably if you tried to order 1,000 burgers or something they might not comply). For example, actor Rob Lowe had one valid for a year in certain Santa Barbara McDonald’s. He got it as a gift from a friend of his, David Peterson, who is noted for not only being a McDonald’s franchise owner, but also the son of Herb Peterson, the guy who introduced the Egg McMuffin in 1972. Lowe stated in an interview that he was planning to “go crazy” at Thanksgiving with the card, suggesting it can be used to order as much food as you (reasonably) want.

Moving over to Burger King, the number of people who hold an equivalent card to the worldwide McDonald’s gold card, according to Burger King themselves, currently stands at 12, known informally as the Crown Club. Each person owns a card that grants them a lifetime of Burger King food anywhere in the world.

That said, like McDonald’s, franchise owners and the company itself have been known to hand out Crown Cards with more limited scope, like free food for a year at specific restaurants or worldwide for a limited duration. Unlike McDonald’s, however, the cards are a relatively recent phenomenon, being introduced, at least publicly, in 2006. The company made the existence of the Crown Club known around this time to draw attention to the release of prepaid gift cards that they dubbed “BK Crown Cards”.

So what individuals make up the Crown Club? Well, according to Burger King, entry to the Crown Club is granted only to people they consider “friends of the brand”, such as certain Burger King workers, as a reward for longtime commitment to the company, and celebrities. According to one executive at Burger King, Cherie Koster, the brand is very deliberate about handing out gold Crown Cards and is “extremely thoughtful about who receives them for life”.

A few celebrities known to posses one include billionaire director George Lucas, who frequently partnered with the chain in movie release promotions; Jennifer Hudson, who worked for the company prior to becoming famous; and Robert Downey Jr.  As for the latter, he famously credited Burger King with saving his life, stating that while coming down from a drug binge and driving across America “with a car full of dope” in 2003, he ordered a burger from the chain so bad it made him reconsider his life choices, throw all the drugs into the ocean, and get on the road to cleaning up his act.

While this story is often misconstrued as Downey Jr making fun of the brand, the actor has explained that he actually loves Burger King and his epiphany was that something in his life was about to go horribly wrong given he could no longer even enjoy something as simple as a cheeseburger. Downey Jr also notes that the scene in the first Iron Man movie where Tony Stark similarly orders and eats a cheeseburger at a pivotal moment of his character arc (when he publicly turns a new leaf) all was a nod to what he considers one of the defining moments in his life, also centered around a cheeseburger.

Finally, there’s famed British actor Hugh Laurie, who in 2008 managed to score himself one of the cards simply by claiming to already have one. In the ensuing media storm about the card, Burger King, amused by his gumption and thankful for the free publicity, sent him a card good for free food forever, worldwide a few days later.

Considering how rare Gold Burger King Crown Cards and McDonald’s Gold Cards are, it would seem that for anyone reading at home, your best bet for scoring such a card would be to befriend or otherwise do something significant for a McDonald’s or Burger King franchise owner, do something especially publicly heroic and mention one or the other of the chains connecting it to your heroic act, or just connect yourself to the brand in some way after becoming so obscenely rich and successful that you’d really have little practical use for the card. Either way, if it works out for you, we’d love a couple of free cheeseburgers for helping give you the idea… just saying. Articles that cover food topics are really, really hard to research and write owing to inevitably making us voraciously hungry for the duration.