November 11, 2016 Karl Smallwood 3 comments
Jeremiah C. asks: Did people actually used to eat their hats? If not, where did the expression come from? 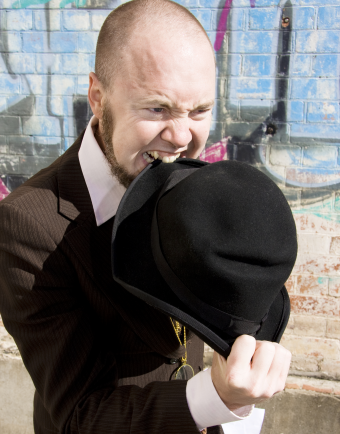 “I’ll eat my hat” is an utterance commonly used when a person is absolutely certain that something will not happen. But where did this unusual phrase first originate and have there ever been any recorded instances of people actually eating their hats after being proven wrong?

According to the venerable Oxford English Dictionary, the earliest known example of the phrase comes from the 1762 book Homer Travestie, by Thomas Bridges. The book is a parody of the more famous Iliad and contains a line that reads:

For though we tumble down the wall, And fire their rotten boats and all, I’ll eat my hat, if Jove don’t drop us, Or play some queer rogue’s trick to stop us.

While this is the first known example of the phrase “I’ll eat my hat” as we’d understand its meaning today, Bridges isn’t believed to have coined the phrase as much as he streamlined a now defunct utterance “I’ll eat Old Rowley’s hat” that had essentially the same meaning.

As for who “Old Rowley” was, this may be referring to King Charles II who was called such owing to his reputation with women combined with the fact that “Old Rowley”
was the nickname of one of the King’s prized stallions. This is referenced, among other places, about a century after Charles II’s death in The Biographical History of England (1775):

In some of the State Poems, Charles II, is ridiculed under the nick-name of Old Rowley, which was an ill-favoured stallion kept in the Mews, that was remarkable for getting fine colts – Mrs. Holford, a young lady much admired by Charles was sitting in her apartment, and singing a satirical ballad upon “Old Rowley the King,” when he knocked at her door. Upon her asking who was there? he with his usual good humour replied, “Old Rowley himself, madam.”

As for why the saying specifically mentioned the king’s hat instead of, say, his shoes or his underwear, this is speculated to be due to the king’s fondness for fabulously flamboyant hats which would be exceptionally difficult, if not impossible, for a person to eat. (Incidentally, a similar foppish fashion trend in the form of giant “macaroni” wigs is also why Yankee Doodle stuck a feather in his cap and called it “macaroni”.)

“I’ll eat my hat” gained widespread acceptance about three-quarters of a century later thanks to the 1837 novel written by Charles Dickens, The Pickwick Papers, in which we have the line: “If I knew as little of life as that, I’d eat my hat and swallow the buckle whole.”

This is uttered by a satellite character to mock the main character who is contemplating out loud about breaking a deal to avoid moving into a sub-par house.

Given how long this expression has been around, this may leave you wondering if anyone has ever actually literally eaten their hat owing to uttering the expression and subsequently being proven wrong. The answer is yes. In fact, in the last few years alone there are several documented instances of this occurring.

For example, in 2014 a user on Reddit predicted that the value of one Bitcoin would never again fall below $1000, adding that they’d eat their hat if it ever did. When the value of the currency did fall below that mark, the user, amusingly identified as “Hat Eater”, uploaded a video of themselves eating an entire cotton beanie on a sandwich. This is in keeping with the culture of Reddit which particularly praises individuals who follow through on such ridiculous boasts, a more extreme example of which can be found in the form of the guy who filmed himself eating a bull penis after boasting that he’d “eat a dick” if his post was liked enough… (And if you’re curious, see: Why is “Dick” Short for “Richard”?)

Then you have an Atlanta Falcons fan who filmed himself eating one of his team’s hats after declaring that the Falcons wouldn’t lose to the Panthers in 2015, and if they did, he’d eat his hat. When they did lose, true to his word, he ate the hat with a Wendy’s chicken sandwich.

Next up we have British politician Lord Paddy Ashdown who publicly declared that he’d eat his own hat if the exit polls for a British election were correct. When they were, Ashdown got out of the whole thing while appearing to keep his word by eating a chocolate cake shaped like a hat during an interview. During the same interview, another MP who’d made a similar claim, only this time promising to eat his kilt, ate a cake shaped like a kilt- in both cases in true political form the individuals actually broke their word but attempted to make it appear as if they did not.