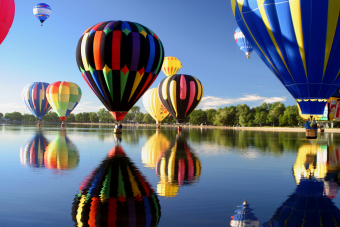 It isn’t often that a duck, rooster and sheep get this much attention. In September 1783, King Louis XVI and his wife Marie Antoinette (see: The Truth About Marie Antoinette’s Cake)- along with 130,000 curious French citizens – stood in the Palace of Versailles’ courtyard to witness a demonstration of a modern marvel. After months of tests, two well-to-do paper manufacturing brothers – Joseph-Michael and Jacques-Ètienne Montgolfier – were ready to debut their “lighter-than-air” balloon, which was to be launched with puffs of heated air. Thirty feet in diameter, the colorful balloon was made from taffeta (a type of silk) and coated with a fireproofing alum varnish. It was decorated with golden flourishes, bright yellow suns (for King Louie, who was known as the “Sun King”) and zodiac signs. A wicker basket was suspended from the bottom of the balloon, which resided the first living passengers to experience a hot-air balloon ride – a duck, rooster and sheep.

With a rousing cheer, the balloon was filled with hot air, untethered and lifted off. While the ride may have only lasted two miles and eight minutes, there’s little doubt the animals got a beautiful view of Versailles. With the balloon landing safely in the woods, the animals were described as not having suffered a bit, “but, they were, to say the least, much astonished.” (With, presumably, the duck being least astonished of all.) The first hot-air balloon flight with passengers was a success.

Even in this day and age of airplanes, space shuttles and drones, hot air balloons still capture the imagination. Majestic, large, and often colorful, there’s something truly incredible about watching a hot-air balloon in flight. And it was with hot air balloons that man first ventured into the heavens. Despite this, while most can name the inventors of the first airplane to achieve sustained flight, few, outside of those who read the beginning of this article, have any idea who invented the first hot air balloon capable of carrying a human. In order to rectify that information gap and more, here’s the high-flying history of hot-air balloons.

In the pre-modern world, there were plenty of examples that can be considered a precursor to hot air balloons. Historians have suggested that during the fourth century BC, the Chinese used “fire balloons” or what we know today as “Chinese lanterns” to signal warfare, send letters and to commemorate festivals. Using virtually the same concept as hot air balloons, the lanterns are lifted up by a candle that heats air.

Inca priests may have used a similar lantern to make religious proclamations. It also has been suggested that Peruvians attached their sacred dead to hot-air balloon-like contraptions for an unknown journey, much in the same way Vikings used boats. There’s even a theory that the famed ancient Nazca lines in Peru were created with crude smoke balloons (although the theory has been largely discredited). Point being, the concept of “lighter than air” vessels has been around for thousands of years.

In early 17th century, the Galileo proved that air had weight. After that came a series of experiments and ideas around creating something that was lighter than air.  Considered the “father of aeronautics,” Jesuit Italian priest Francesco Lana-Terzi drew up plans for what is basically a flying boat. According to Lana-Terzi’s written and drawn explanations, round spheres with air vacuumed out – therefore making them lighter than air – was supposed to keep the vessel afloat. While impractical, his understanding of needing to create something lighter than air was sound. Several decades later in 1709, in front of King John V Portuguese priest Bartolomeu de Gusmão showed off a small paper balloon that levitated to the palace ceiling.

Seventy years after that, the Montgolfier brothers took up the task of perfecting hot-air balloons. Born into a family of paper manufacturers in Annonay, France, Joseph and Ètienne were set for a comfortable life producing scrolls until, as legend has it, Joseph keenly observed a phenomenon while watching laundry dry over a fire. With smoke rising from the fire, billows of air formed in the clothes’ fabric, pushing the garment up and creating bubbles of air. Not quite understanding what was happening, he believed that the smoke had a special gas in it – which he named after himself, Montgolfier Gas.

Whether that’s all really how inspiration struck or not, thinking that such a flying instrument concept could be used for military advantage (at the time, France was warring with England on several fronts), he got his brother on board to experiment and investigate further what Joseph would later call a “cloud in a paper bag.”

June 4, 1783 was the first demonstration of a Montgolfier balloon in the marketplace of their hometown of Annonay. Made from taffeta, fabric and paper materials and weighing 500 pounds, the balloon actually floated to an estimated altitude of 6,000 feet (1.8 km). Knowing they were onto something, they made their way to Paris to showcase their invention. Four months later, despite King Louis XVI’s insistence that they use prisoners, it was the duck, rooster and sheep who made history.

A month after animals, physics and chemistry teacher Jean-François Pilâtre de Rozier was the first human to take a trip in a tethered hot air balloon.

On November 21, 1783, Rozier was joined by a French military officer named Marquis d’Arlandes in a Montgolfier hot air balloon.. After several practice runs to get the feel for how to work the balloon, de Rozier and d’Arlandes finally made their first untethered flight leaving at 2:00 p.m. from the garden of the Château de la Muette to the Butte-aux-Cailles.

This 25 minute flight covered about 5 1/2 miles (9 km) with the balloon reaching an altitude of nearly 3,000 feet (0.9 km).  At the completion of the flight, there was enough fuel left to have allowed the balloon to have gone four to five times as far, but parts of the balloon itself began to catch on fire, so they chose to land early.  Upon landing, the pilots drank champagne to celebrate their successful flight, which started the tradition still commonly maintained by balloonists to this day.

None other than American great Ben Franklin, who was serving as United States’ ambassador to France, was in attendance for this historic moment when man first slipped the surly bonds of earth. Franklin later wrote in his journal about what he witnessed that day,

We observed it lift off in the most majestic manner. When it reached around 250 feet in altitude, the intrepid voyagers lowered their hats to salute the spectators. We could not help feeling a certain mixture of awe and admiration.

However, with flight came danger. On June 15, 1785, Rozier accomplished another first – the first to die in a balloon accident when his balloon (filled with hydrogen and hot air) exploded while he attempted to fly across the English Channel. (And if you’re curious, see The First Person to Die in an Airplane Crash)

It was actually another Frenchman, Jean-Pierre-François Blanchard, who became the first to cross the English Channel in a balloon. (You can read more on the amazingly interesting story of this crossing here: Dustbin of History: Aero-Nuts) Becoming somewhat of a celebrity, he took his balloon show on the road and became the first to fly in a balloon in several countries, including America.

In 1794, Blanchard took off from Philadelphia in front of George Washington, who had expressed his fascination with ballooning in numerous letters. Because Blanchard was not an American citizen, Washington gave him a “passport” guaranteeing him rightful and safe passage no matter where he landed in the country. 45 minutes later, Blanchard landed in Gloucester County, New Jersey.

By mid-19th century, ballooning had been established as little more than an exciting novelty. It was Thaddeus Lowe who first successfully showed it could be used for military purposes (1840s attempts by both the Australians and French were not successful).

A self-taught meteorologist, Lowe was using balloons to help his studies of the weather, but when the Civil War broke out in April of 1861, Lowe knew he could be of help to the Union. On April 19th, 1861, he took off in his balloon from his home state of Kentucky in hopes of landing on the White House front lawn so he could impress President Lincoln.

Instead, he landed in South Carolina – Confederate territory.

After taking a train, he ended up meeting Lincoln in June of 1861 and convinced him that balloons would make the perfect surveillance equipment. On Sept 24th, 1861, he ascended more than 1000 feet in the air in Arlington and spotted Confederate troops over three miles away. Relaying that information to the Union, the Confederates were attacked a short time later.

Lowe and his balloon would prove to be invaluable to the Union, creating a tactical advantage for the remaining days of the War. Because of his constant presence behind enemy lines, Lowe is known as the Civil War’s “most-shot-at man.” (You can read more about all this here: The North’s Air Force During the American Civil War)

As the years went on, balloons continued to improve and capture the imagination. The late 20th century still had a few firsts for hot air balloons, including the first Atlantic crossing in 1987 and the first Pacific crossing in 1991. Finally, in 2002 Steve Fossett (who would later disappear while flying a plane) completed the first nonstop around-the-world trip in a hot air balloon. No doubt, the duck, rooster and sheep would have been impressed.