What Happens to Lost Luggage on Airplanes? 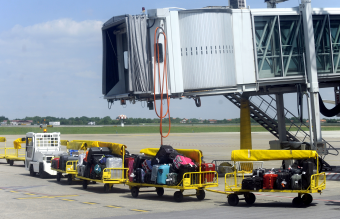 You watched your bag get loaded onto the plane, and then it was gone. What happened to it?

After a long flight, airline passengers shuffle to the baggage claim area and wait for their luggage to slide down the chute and onto the carousel. Most passengers see their bag, grab it, and go on their way. But not everyone. Every year, of the more than 2.5 billion bags checked onto flights worldwide, 26 million go missing—and of that 26 million, 1 million never make it back to their original owner. Bad weather and flight delays, miscoded destination tags, and the fact that some people simply forget to take one of their bags off the carousel are a few of the reasons. But the number-one reason a bag ends up lost is that it has no ID tag, and airlines don’t know to whom it belongs.

Transferring luggage from check-in to departure gates to arrival gates to baggage claim is a delicate piece of timing. If the system moves too slowly, the baggage won’t make connecting flights. If it’s too fast, the bags may make the connection but the passengers might miss the flight. Each airport has its own way of allotting how much time a bag needs to move in transit. Denver International Airport, for example, has a sophisticated automated system that includes scanners that read luggage labels, destination-coded vehicles that travel along tracks and load and unload the bags without stopping, and sorting machines that route baggage to the appropriate gate. Even so, all that technology may not save your luggage tag from being torn off in the conveyor belt, making you the hapless owner of a bag with no name.

Once a bag goes missing and the passenger files a claim, the bag is declared “mishandled” by the carrier. Mishandled refers to bags that have been delayed, lost, stolen, or damaged. Most delayed bags are only one flight behind their owners and can be delivered within 24 hours. The other bags are examined by airline employees for clues to their ownership and destination. If the mystery is solved, those bags are returned to their owners within four or five days. Bags with no destination code or identification tag are shipped to a central warehouse, and undergo a comprehensive baggage tracing process over the next 90 days.

Every airline has its own investigation procedure. According to Jan Fogelberg, Frontier Airlines’ vice president of customer service, “Our employees don surgical gloves and then do an autopsy of the bags.” Photos, shopping receipts, and names on prescription bottles have all been used to trace a bag’s owner.

Airlines inventory their mishandled luggage, and many use a database to match the contents with owners’ descriptions. It takes about three months to go from “missing in action” to “irretrievably lost.” Once that happens, the bags are donated to charity, sold at auction, or purchased by a company like the Unclaimed Baggage Center in Alabama (more on this in a bit), which sells the bags and their contents to the public.

As for the unfortunate bag owners, in the United States, airlines pay a maximum of $3,300 for a lost bag. But receipts for big-ticket items have to be produced to justify a claim that high, so travel experts recommend you never pack cameras, jewelry, electronic devices, or anything of real value in your checked baggage. Another recommendation: make sure your name is on the outside and inside of the bag, along with a copy of your itinerary and phone number so an agent can find it. It also doesn’t hurt to have something really flashy and unique on your luggage to make sure other people don’t mistake your bag for theirs.

In 1970 Doyle Owens was working as a part-time insurance salesman in Scottsboro, Alabama, when he got a call from a friend who worked for the Trailways Bus Company in Washington, D.C. The friend asked if Owens was interested in buying Trailways’ unclaimed luggage. He was, so with a $300 loan and a borrowed pickup truck, Owens drove to Washington, brought the bags back to Scottsboro, and the Unclaimed Baggage Center was born. Owens started small, selling the luggage items on card tables in a rented house. Within four years, he was buying unclaimed luggage from airlines, trains, car rental companies, cargo ships, and cruise lines. Today, the inside of the UBC looks like a department store, and it takes up an entire city block.

Once lost luggage finds its way to the Unclaimed Baggage Center, the bags are unpacked, and items are sorted and prepared for sale. More than 20,000 pieces of clothing are laundered and dry-cleaned each day. (The UBC operates the largest commercial dry cleaner in the state of Alabama.) Phones, iPads, and laptops are wiped clean; jewelry and art are appraised. Ski equipment, rifles, diamond rings, wedding dresses, and everything else that might be found in a suitcase or crate is priced and put out for sale. Shoppers hoping to find their lost belongings at the UBC will be disappointed. Only once in 40 years of operation has anyone found an item from their own luggage––a pair of ski boots.

Thanks to features in newspapers and magazines stories, the UBC has become a tourist destination for more than a million shoppers a year. Seven thousand new items are put out every day. Mostly just what you’d expect to find in unclaimed baggage—clothing, electronics, books, and suitcases. But some unusual items have also shown up, including a full suit of armor, a shrunken head, a 40.95-carat emerald, and a live rattlesnake. Most of these items the UBC keeps. It did, however, return an F-16 guidance system to the U.S. Navy (worth $200,000) and a space shuttle camera to NASA. One item it did not return was a famous piece of movie memorabilia.

OUT OF THE BOX

In 2005 a worker began unpacking a large crate that had arrived at the UBC warehouse. After prying off the lid, the man dug through the Styrofoam peanuts and shredded newspapers to discover something so startling it sent him diving for cover. Peering out through the mound of packing material was a four-foot-tall monster with pointy ears, bushy eyebrows, and bulging eyes. A metal mask covered in decaying foam latex shaped the face he recognized as Hoggle, the dwarf-goblin puppet from the 1986 movie Labyrinth.

Jim Henson’s Creature Shop built the puppet in 1985 from illustrator Brian Froud’s conceptual designs. At the time, Henson said, “Hoggle is the most complicated puppet creature we have ever built.” It took 18 motors operated by four people with remote controls to create its facial expressions. A fifth operator performed the body and head movements from inside the puppet. Labyrinth (directed by Henson, written by Terry Jones, produced by George Lucas, and starring David Bowie and 16-year-old Jennifer Connelly) cost $25 million to produce ($56 million today) but was a box office failure.

After filming, Hoggle was packed in a crate and shipped off on tour, only to be lost in transit for 19 years. During that time, his latex face and hands had disintegrated and his clothing decayed. Once the crate was purchased by UBC, they owned its contents, and John Marshall, CEO of UBC, began looking for someone to restore it. Marshall called the well-known doll doctor Gary Sowatzka in Lake Tomahawk, Wisconsin, and he accepted the job. The restoration was completed in 2006, and Hoggle now stands at the entrance to the UBC Museum of Found Treasures, greeting the hundreds of thousands of shoppers who visit the baggage center every year.