This Day in History: September 17th- The Smothers Brothers Comedy Hour, The Who, and an Explosion 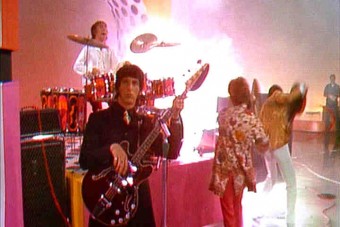 “I have severe hearing damage. It’s manifested itself as tinnitus, ringing in the ears at frequencies that I play guitar. It hurts, it’s painful, and it’s frustrating.” – Pete Townsend

A defining moment in television and rock and roll history occurred on September 17, 1967, when the Who appeared on The Smothers Brothers Comedy Hour. The band performed their soon-to-be anthem “My Generation” (“Hope I die before I get old!”), trashed their instruments and stage gear, and, as the grand finale, set off an explosion originating from Keith Moon’s drum kit.

It was a prank meant as harmless good fun by the notoriously devilish Moon, who had a stagehand load his kick drum with explosives prior to the band’s performance. When they were detonated, Moon was injured by shrapnel from a broken cymbal and thrown backward to the floor.

Singer Roger Daltrey went to check on Moon while the stage began to fill with smoke. The explosion also cost Pete Townsend most of his hearing. However, he still managed to smash Tommy Smothers’ acoustic guitar as Smothers looked on in semi-shock at the chaos.

The kids, of course, loved it. Their parents, on the whole, did not.

Despite their clean-cut appearance, the Smothers Brothers pushed the boundaries of what was considered appropriate for a comedy-variety program of its era. Pete Seeger made his first television appearance since being blacklisted in 1950 on the show’s first episode of their second season in September of 1967. His performance of “Waist Deep in the Big Muddy” was removed from the broadcast after he refused to remove a verse from the song that CBS found offensive.

Season three opened with Harry Belafonte performing “Lord, Don’t Stop the Carnival” against a backdrop of the violence at the 1968 Democratic National Convention. CBS deleted this entire segment as well. This left the show a full five minutes short. The network sold the time to the Republican Party to run campaign ads.

The skits were heavily censored by CBS as well, and Tom and Dick Smothers were so enraged they went public and told their audience that they were “being shut up by CBS.”

One week the subject of Paul Paulsen’s weekly editorial was censorship, and his concluding line was, “There is a place for censors. We only wish that we could tell you where it is.”

The interesting thing about all of this was that CBS had commissioned The Smothers Brothers Comedy Hour to attract young and hip viewers. These viewers wanted racy comedy, rock bands, drug humor, and frank discussion about the Vietnam War, Civil Rights – and censorship. And yet, these were the very subjects the network fought so hard to keep off the show. CBS then insisted the show be taped far enough in advance so that they could preview each episode before it aired.

In the end, The Smothers Brothers Comedy Hour was canceled in June of 1969 and replaced with Hee Haw. Tom and Dick filed a breach of contract lawsuit against CBS as the show had already been picked up for another season when it was abruptly canceled. CBS had to cough up $916,300 (about $5.8 million today). The Smothers Brothers moved to ABC in 1970 but weren’t able to recapture the energy of the original show.