This Day in History: September 18th- Booze and Barbiturates 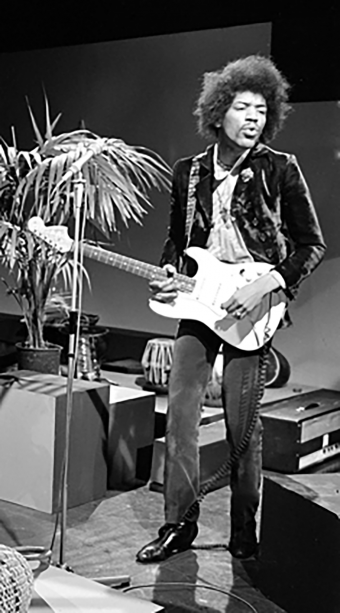 Although he was only prominently in the public eye for four years, Jimi Hendrix is hailed by many as the greatest rock guitarist of all time. He was a cultural icon for the Woodstock generation, a psychedelic, sexy voodoo child who fused the blues, R&B and rock into a heady mix that no-one else has been able to recapture or replicate in popular culture since. His untimely death on September 18, 1970, came at the height of his creative powers.

Born in Seattle, Washington on November 27, 1942, Jimi learned to play guitar by listening to the music of Muddy Waters, B.B. King and Chuck Berry. During high school, he played in various bands before doing a stint in the Army from 1959-1961. After being discharged, he moved to New York City and played guitar for various big names including Little Richard, Jackie Wilson, B.B. King and Sam Cooke.

In 1965, Hendrix formed his own group called Jimmy James and the Blue Flames and began playing Greenwich Village coffeehouses. Chas Chandler, fresh out of the Animals, saw the talent and star potential in Jimi. He convinced him to come to London, and soon after he hooked up with bass player Noel Redding and drummer Mitch Mitchell.

Almost immediately, the Jimi Hendrix Experience was the talk of London Town. The first two singles from the band’s double-platinum “Are You Experienced” debut album, “Hey Joe” and “Purple Haze”, made him a phenomenon in the UK. Paul McCartney was particularly impressed and insisted that Jimi be offered a spot at the Monterey Pop Festival. He didn’t disappoint, delivering his unforgettable guitar-burning performance of “Wild Thing” that has become the stand-out memory of that concert.

The Experience released “Axis: Bold as Love” and “Electric Ladyland” in 1968. By then Jimi was a superstar, but he was more interested in being a musician than a pop icon. Still, fame had its perks, allowing him to take greater control over his music and to build his own recording studio in New York – Electric Lady Studios.

In 1969, The Experience disbanded, but Jimi kept going full steam ahead. He owned the Woodstock Music & Art Fair, closing the festival with his unique take on “The Star Spangled Banner” that blew everyone away with its power and virtuosity. Later that same year he formed Band of Gypsies with Army pal Billy Cox and drummer Buddy Miles. The group played a series of four concerts over Dec. 31, 1969 – January 1, 1970.

Jimi reformed The Experience again with Billy Cox and Mitch Mitchell in 1970 and began recording for a new double album “First Ray of the Rising Sun.” It was slow going though, as he seemed unsure of the direction he wanted to take and was also seeking to get out of his contract with his manager, Mike Jeffery.

This brings us to the very early a.m. of September 18, 1970. At this time, Jimi was at his girlfriend, Monika Dannemann’s, apartment where he drank a great deal of wine. The coroner later determined his blood alcohol level upon death was 100 mg per 100 ml or “enough to fail a breathalyzer test … the equivalent of about four pints of beer.”

This alone would probably have been harmless enough,  but he also took a bunch of Monika’s Vesperax sleeping tablets – way over the prescribed dose, with Dannemann claiming he took 9 or 10 of them. According to Klaus-Peter Dannemann (the brother of Monika), his sister told him shortly after Jimi’s death that Jimi had done so intending to sleep “for a day and a half before he went to America…”

What exactly happened after this is a matter of debate. But in the morning, an ambulance was called and Jimi was found dead at the scene, though medics did attempt to revive him as a matter of course. They also stated that when they arrived, the door was open and there was no one there, just the unidentified body. When they attempted to move it, they found “the gases were gurgling; you get that when someone has died.” It wasn’t until later that they found out who it was they were working on.

Oddly, Dannemann later stated she had been there and accompanied the medics and Jimi back to the hospital.  She also stated that Jimi had been alive at that point, despite this contradicting the statements of the medics at the scene. In the end, an autopsy later determined Jimi had died of “Inhalation of vomit due to barbiturate intoxication.” He was just 27 years old.