This Day in History: August 27th- A Foggy Night and the Death of a Legend 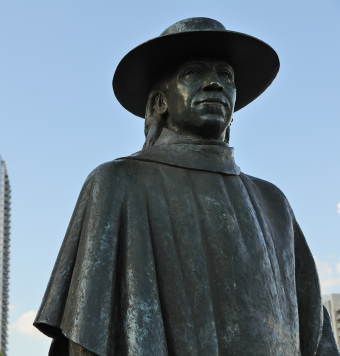 Dallas, Texas, native Stevie Ray Vaughan grew up inspired to play guitar by his older brother Jimmie Vaughan (of the Fabulous Thunderbirds) and went the usual garage band route of most aspiring young musicians. He formed the band Double Trouble from the ashes of an earlier band in 1978, taking on both lead vocal and lead guitar duties.

The band grew an enormous following in the Austin area and attracted the attention of Jackson Browne and David Bowie. In 1983, Browne offered the band free studio time, and Bowie asked Stevie Ray to play guitar on his latest album “Let’s Dance.” Vaughan gladly accepted both offers. Later that year, Double Trouble landed a contract with Epic Records and recorded their debut album “Texas Flood” in less than a week.

Throughout the ‘80s, Stevie continued to give us a welcome, kick-ass alternative to hair- and boy-bands with classic rock-blues offerings like “Couldn’t Stand the Weather” and “Soul to Soul” (1984 and 1985), bringing some much needed bluesy-cool to the 1980s musical landscape with virtuoso guitar mastery arguably not seen since the glory days of Clapton and Hendrix. Stevie’s biggest triumph came in 1989 with “In Step,” Double Trouble’s biggest seller to date which won a Grammy for Best Contemporary Blues Recording.

This brings us to the spring of 1990 when Stevie Ray got together with his brother Jimmie to record an album (“Family Style”) scheduled for release that fall. Meanwhile, Stevie and Double Trouble hit the road on a headlining North American tour. They had just wrapped up over three dozen gigs with guitar hero Jeff Beck when the band hooked up to do some dates with living legend Eric Clapton in East Troy, WI., on August 26, 1990.

After the show, in the early morning hours of August 27th, 35-year-old Stevie Ray Vaughan died when the helicopter he was riding crashed. There were no survivors. It took many hours for an air patrol team to locate the accident site, but getting to the crash sooner wouldn’t have helped. Autopsies revealed everyone died on impact.  Vaughan himself had multiple injuries that would have been individually fatal, including transection and dissection of the aorta, skull fractures, and a ruptured spleen and liver. Eric Clapton and Jimmie Vaughan had the unenviable task of identifying Stevie Ray’s and Clapton’s business team’s bodies.

It also should be noted that, contrary to rumors that began circulating almost immediately after the tragedy and persist to this day, Stevie Ray did not take a seat meant for Eric Clapton at the last minute. Rather, after the show when Vaughan, Jimmy, and Jimmy’s wife Connie tried to catch one of the four helicopters waiting to depart back to Chicago, they discovered their seats had been taken by Bobby Brooks, Nigel Browne, and Colin Smythe, members of Eric Clapton’s crew.  Vaughan was anxious to get back to Chicago as soon as possible, so took the last seat and left Jimmy and Connie behind.  The helicopter crashed shortly after takeoff when the pilot, Jeff Brown, accidentally ran it into a ski slope at a high speed.

At the time, the helicopter was at an altitude of around 850 feet, with the mountain being around 1000 feet tall.  It is thought the pilot had been attempting to take the helicopter around the mountain, rather than over it, but misjudged his position due to thick fog and darkness (it was about 1:00am).  Thus, he couldn’t see the mountain and was relying solely on instruments to navigate.  The helicopter did bank sharply just before crashing, so he probably at the last moment realized his mistake.

Stevie Ray Vaughan was buried in his hometown of Dallas, Texas on August 30, 1990. Among those present to pay their respects were Bonnie Raitt, Stevie Wonder, Jackson Browne and ZZ Top. The following year, Texas Governor Ann Richards declared Stevie’s birthday, October 3, “Stevie Ray Vaughan Day” in Texas. To celebrate, a blues concert and motorcycle rally is held to raise money for the Stevie Ray Vaughan Memorial Scholarship Fund. A fitting tribute to a musician whose name was, and is, worthy of being spoken with the true greats, despite the fact that he was really only just getting started.