This Day in History: August 25th- The Children’s Crusade 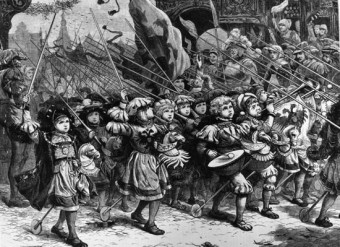 In certain regions of the world, the Middles Ages was a time of religious fervor, portents, visions and the unbridled zeal to abolish the Infidel by any means possible. All of these factors came together to inspire the Crusades – pilgrimages made by good Christian men to the Holy Land to free it from the clutches of Islam.

To die during the process (and many did) was a trifle. Your heavenly reward for snuffing it in the midst of such a “noble” effort would surely be worth the earthly sacrifice.

This brings us to the stories of the so-called Children’s Crusade. In the first instance, it supposedly all started with a 12-year-old French boy named Stephen. He gave a scrap of bread to a beggar who just so happened to be Jesus. Jesus, apparently in great need of a postal service, gave Stephen a letter to pass along to the French king and told the boy it would be his job to lead the next crusade.

The story goes that he journeyed to St. Denys and was treated to the sight of many miracles and visions along his way. With all this, he had no trouble winning over an impressive number of followers. An apparition of Jesus was pretty good reference in those days.

Over the course of his little adventure, Stephen reportedly managed to gather a crowd of 30,000, (one wonders how such a band of children managed to stay fed and watered?) and when they reached Marseilles, two merchant seamen supposedly offered to give everyone a lift in their vessels. What luck!

Not so fast. The story goes that of the seven ships crammed full of kids (presumably whining “are we there yet?”) two were lost during a storm. The other five made it to Africa, where all the pilgrims on board were promptly sold as slaves…

A second, very similar thing supposedly happened in Germany, but with a couple notable differences. Several groups began organizing in separate parts of the country that eventually joined under the leadership of a guy named Nicholas. These groups seemingly weren’t kids, but mostly teenagers and young adults.

It was no joy ride, however. A great number of them perished on the trip over the Alps. This particular youth Crusade reportedly reached a critical turning point on August 25, 1212, when Nicholas and 12,000 followers reached the port of Genoa in Italy. Nick promised the crowd that the Mediterranean would part, allowing them all to stroll right across. When he couldn’t pull off a Moses-type sea-parting, the Crusade was no more.

Or so the stories go. In truth, while these two legends have certainly grown over the years (and are often combined into one story, with the details varying by the teller), contemporary sources don’t actually depict the participants in these mini-crusades as children- that narrative first came many decades later. The most we can say for sure is that there were seemingly a couple of good-sized economically disenfranchised groups of young folks (but almost certainly not little children as is commonly depicted today) wandering around Europe in 1212; but beyond that, hard documented evidence of who they were exactly and what they got up to is scant.