This Day in History: August 28th- The Battle of Michigan Avenue 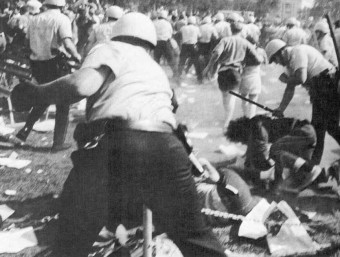 “If you’re coming to Chicago, be sure to wear some armor in your hair.” – The Chicago Seed – alternative newspaper

On August 28, 1968, growing opposition to the war in Vietnam came to a head inside and outside the International Amphitheatre in Chicago. The Democratic National Convention in 1968 was one of the first times American politicians en masse officially questioned the idea of knee-jerk invasions to stop the spread of Communism, no matter the cost.

Democratic delegates were split on the issue, causing a serious rupture in the party. Those supporting Eugene McCarthy, the firmly anti-war candidate, strongly challenged the assumption that the U.S. should remain engaged in the war. As the debate became more heated, fighting broke out, and the fighting escalated to rolling-on-floor brawling. (The status quo eventually won the field, as sitting Vice-President Hubert Humphrey took the nomination.)

Outside, people had come from all over the country to protest the Vietnam War and show support for Eugene McCarthy. As Lennie Davis, the project director for the National Mobilization Committee to End the War in Vietnam, said at the outset, “Many of our people have already gone beyond the traditional electoral processes to achieve change. We think that the energies released…are creating a new constituency for America. Many people are coming to Chicago with a sense of new urgency, and a new approach.”

Tom Hayden said protest organizers worked for months in advance of the protests to secure permits from the city of Chicago to march, rally, and camp in the parks. “We were used to the idea that authorities would stall on permits, but I think some of us thought that the permits would come through at the end, so we went forward,” he said.

However, mayor Daly wouldn’t issue permits, but he did take the time to round up 12,000 cops, 6,000 soldiers and 6,000 members of the National Guard. There was next to nothing the protesters could do without breaking the law, so the police came at them with gas and clubs. They even attacked members of the media and physicians who jumped in to assist the wounded. A federal commission later classified their behavior as a police riot. It became known forevermore as the Battle of Michigan Avenue.

One of the worst episodes of violence occurred outside Conrad Hilton Hotel on August 28. It also got the most coverage because most of the news media was based there during the convention. CBS engineer Fred Turner reported the events as they occurred from his vantage point on the fifth floor:

“Now they’re moving in, the cops are moving and they are really belting these characters. They’re grabbing them, sticks are flailing. People are laying on the ground. I can see them, colored people. Cops are just belting them; cops are just laying it in. There’s piles of bodies on the street. There’s no question about it. You can hear the screams, and there’s a guy they’re just dragging along the street and they don’t care. I don’t think … I don’t know if he’s alive or dead. Holy Jesus, look at him. Five of them are belting him, really, oh, this man will never get up.”