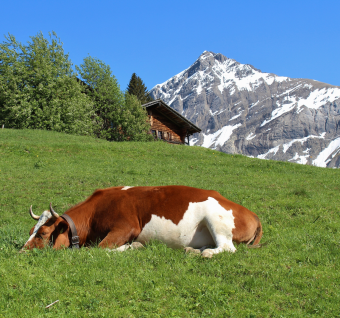 For the uninitiated, cow tipping is a prank where a person sneaks up on a sleeping cow and pushes the animal over onto its side.

Ask around and you can probably hear about a friend of a friend who successfully tipped a cow while out in the country late one night. The story generally recounts participants having a few alcoholic drinks before driving to a cow pasture and setting upon a slumbering bovine.

But is it really possible to tip a cow?

Well, anything is possible and humans are quite inventive, but in the way that cow tipping is generally depicted- no, it is not possible to tip a sleeping cow.

The first issue here is that cows don’t actually sleep while standing up, at least not in the way we tend to think of sleep. Cows do sometimes enter a sort of restful state while standing up, but while in this state they are easily startled and are reasonably well aware of what’s going on around them. Their deep sleep state occurs while they are already lying down (something they do for about 14 hours per day, with a few hours of that time in a deep sleep; the rest of the time they’re either awake or in their light-resting state).

Another issue with the idea of sneaking up on a cow that is resting while standing is that at any given time in a herd of cattle, a number of the cows are wide awake. Cows may be largely domesticated animals today, but they still retain their flight instinct when they suspect a predator is nearby or observe others in the herd that appear startled by something. One cow will very quickly, via their behavior, alert the others in the herd if they hear or see anything suspicious, causing the others to in turn become on edge and alert. Given a standing cow that is resting is very easily startled from its resting state, even without any other cows around, this makes the idea of sneaking up on one of these cows even more difficult, if not impossible.

But let’s say you and your friends manage to somehow park your car within walking distance of a cow without alerting it (harder than you think on a quiet country night, even parking a couple miles away), then you manage to hop the barbed wire fence and creep up to said cow without alerting it or any other cows in the herd via sound, sight, or your scent. In that increasingly unlikely scenario, would you physically have the strength to tip the cow?

Dr. Margo Lillie and Tracy Boechler of the zoology department at the University of British Columbia conducted a study in 2005 to figure out the answer to this very question. Lillie and Boechler determined that it would take approximately 1,360 to 2,910 Newtons of force applied at the optimal angle to tip an average cow. (For reference, an average full grown Holstein dairy cow typically weighs in at around 1,500 lbs, though this can vary by a few hundred pounds depending on a variety of factors).  They then estimated that an average adult human could generate approximately 660 Newtons of force at the optimal tipping angle. So in theory, on the low end with a completely static cow, approximately two people could apply enough force to tip said static cow.

The problem is that a cow would most certainly not stay static in such a scenario.  And heaven help you if you tried to push over an 1800 to 2000+ pound bull. (People don’t generally survive being attacked by bulls, which is probably what would happen if you tried sneaking up on one and attempted tipping it over.)

So, on the high end, according to Dr. Lillie, overcoming the non-static cow’s ability to brace itself would require in the optimal scenario around five people. But even if you did this, there is the fact that a cow in a state of falling is generally perfectly agile enough to simply catch itself and trot away.

In the end, while it is technically possible for a group of humans to devise a way to cause a cow to tip over, it is, in the practical sense, impossible in the way generally illustrated when stereotypically inebriated individuals are described as tipping cows.

So where did the idea of cow tipping come from? Unfortunately, the answer is that no one knows for sure. It has been theorized that the practice of attempting cow tipping probably came about via serving the same function as snipe hunting- sending a gullible individual out to perform some impossible task for the amusement of those in the know. (Although it should be noted that this is a potentially very dangerous snipe hunting style game, particularly if there is a bull around in the herd.)

As for how this particular “game” entered the mainstream, stories of it began popping up in the late 20th century and it particularly gained steam thanks to such movies as Heathers (1989) and Tommy Boy (1995), along with a Season 4 episode of Beavis and Butthead titled “Cow Tipping” (1994) where the duo failed in their attempt at tipping a horse, then were successful at tipping a cow which landed on Beavis. More recently, the 2006 Pixar film Cars depicts Mater and Lightning tipping cow-like tractors.