Saburō Sakai: The Samurai of the Skies 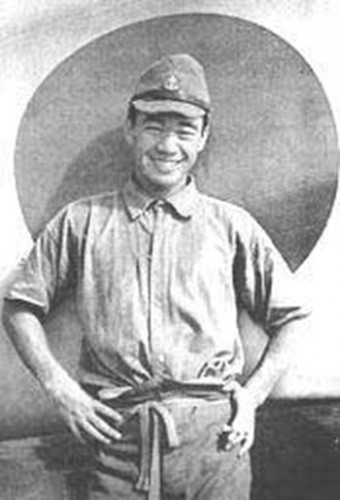 Saburō Sakai is perhaps one of the most famous Japanese air aces to emerge from WWII, credited with at least 28 aerial victories and shooting down or severely damaging well over 60 Allied aircraft, despite later in the war flying a plane that was vastly inferior to his opponents’ planes.

Saburō Sakai was born one of seven children in a poor farming family in 1916 just outside of the city of Saga in Japan. Despite his limited upbringing, Sakai was reportedly very studious and was considered one of the best students at his school; so much so that his uncle paid for him to come to Tokyo to study there when he was 12 years old. However, despite his best efforts, Sakai was unable to keep up with his peers in Tokyo and after two years, his uncle sent him back home. It’s stated that on this fateful train journey home, Sakai saw a poster advertising recruitment for the Japanese Imperial Navy; two years later when Sakai turned 16, he enlisted and began his training.

Sakai quickly rose through the ranks of the Imperial Navy serving aboard two Japanese battleships and eventually earning the rank of Petty Officer Third Class. In 1937, he applied for pilot training school, from which he graduated at the top of his class of 70, of which only 25 managed to successfully complete the required course of training in a satisfactory manner. For his performance, Sakai was given yet another promotion, this time to the rank of Petty Officer Second Class and a silver watch, presented to him personally by the Emperor. It’s from this point on that Sakai story gets interesting.

Prior to WWII, Sakai flew several combat missions during the Second Sino-Japanese War and it’s noted that during his first ever mission, he annoyed his commanding officer by using all of his ammunition to shoot down a single plane. Something he made up for a short while later when the airfield he was stationed at was bombed by the Chinese in 1939. According to historical consultant, Mark Barber, despite being injured by the explosion, Sakai: “sprinted through burning aircraft to find an undamaged fighter before taking to the skies to chase the fleeing bombers.”

Sakai was unable to shoot down the bomber that had attacked his airfield, but his actions didn’t go unnoticed by his superiors. Although they did not give him any sort of medal for his heroism, a theme that would be consistent throughout Sakai’s impressive career, he was promoted to Petty Officer First Class.

As WWII heated up, Sakai’s skills as a pilot became more and more apparent and, as mentioned, he’s credited with downing over 60 Allied aircraft, including one dogfight in 1942 where Sakai shot down a confirmed three aircraft in the span of a mere 15 seconds.

That said, Sakai didn’t always get his target. For example, in 1942, Sakai tried and failed to shoot down a B-26 near the coast of New Guinea. Why is this significant? Future U.S. President Lyndon B. Johnson was aboard that B-26.

Though Sakai was indeed unflinching in his sense of duty, he was prone to bouts of disobedience which often bordered on the hilarious. For example, he would openly smoke comically huge, illegally obtained cigars in front of his superiors and once fired his pistol at the feet of an officer administering a beating to one of his wingmen.

However, the incident that got Sakai in the most hot water was when he, along with two of his wingmen, flew over the Port Moreseby Airfield in their Zeroes after an aerial skirmish and did a number of loop the loops just to annoy the Allies. A few hours later, a bomber flew over Sakai’s base and dropped a note thanking the Japanese for their “wonderful display of acrobatics” and informing them that the next time they tried a stunt like that they’d have a “warm welcome” waiting for them.

Sakai’s most famous exploit came during that same year when he was shot in the face by an enemy plane he was in the process of trying to shoot down. The shot destroyed the vision in Sakai’s right eye and crippled the entire left side of his body. Disoriented from the wound, Sakai lost control of his plane which went into a steep dive.

In a stroke of luck, the dive actually ended up helping him by extinguishing the flames threatening to consume the cockpit. Using his one good arm, Sakai was able to clean away some of the blood from his face using his fetching silk scarf. When asked to later recall that day, Sakai notes that his first thought was that he wanted to die taking at least one enemy with him and he immediately began looking for an Allied ship into which he could crash his damaged plane. Despite this, Sakai would later become one of the most critical opponents of the controversial Kamikaze technique. (See: How Were Kamikaze Pilots Chosen?)

In the end, once he found his plane was still airworthy, he changed his mind and managed to make it back to base, barely. What makes this trip back even more remarkable was that Sakai famously flew almost the entire 1040 kilometre journey back to base UPSIDE DOWN to stop the blood from his wounds getting into his good eye and memorably refused medical treatment until he made his mission report.

Despite losing the sight in his right eye, he did eventually return to the skies towards the end of the war and due to his status as one Japan’s top flying aces, there were literal fights between younger pilots about who would be his wingman.

In later interviews, Sakai maintained that the loss of his eye never affected his flying ability, something he proved in a dogfight in 1944 that vaulted him from flying ace, to legend. At this time, he was ambushed by no less than 15 Allied Hellcats near Iwo Jima. In a dogfight that lasted some 20 minutes, Sakai wasn’t hit by a single enemy round, despite thousands of rounds being shot at him and his craft being vastly inferior to those he was up against at this point in the war.  In fact, the combination of the Japanese pilots being largely outnumbered and in outdated planes near the end of the war resulted in the Battle of the Philippine Sea in June of 1944 getting nicknamed “The Great Marianas Turkey Shoot” by the Allies. Further, two years before this, in June of 1942, Japan lost more airmen in a single day than they had managed to train in an entire year just before the war. This might have you wondering how Sakai survived the fight.  He simply dodged bullets the best he could while making sure the battle drifted towards Iwo Jima, where anti-aircraft guns could do what he could not in that situation.  It worked and, once in range of the guns, the Hellcats were driven off.

After the war, Sakai became a Buddhist and vowed to never harm another living thing. He also went on to become good friends with some of the men he’d previously called his enemy, including Harold Jones, the man who fired the round that cost him the sight in his eye, as well as Paul Tibbets, the pilot of the plane that dropped the atomic bomb on Hiroshima. (See: The Men Who Dropped the Bombs on Hiroshima and Nagasaki)

Saburō Sakai died in 2000 at the age of 84 while attending a formal dinner at a U.S. Navy airbase, in which Sakai was a guest of honour. As the New York Times noted shortly after his death, Sakai “suffered a heart attack as he leaned across the table to shake hands with an American; he died later in a hospital.”