When Did People Start Smoking Tobacco? 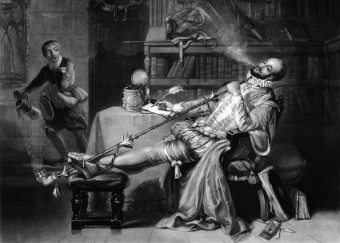 While who exactly was the first to smoke tobacco has been lost to history, Jordan Goodman, in his book Tobacco in History, theorizes that tobacco was first cultivated thousands of years ago in the Americas, around the regions that have become known as Mexico and Brazil. The populations grew the plant for medicinal and ceremonial purposes, possibly mixed with other plants to create a hallucinogenic drug. However, evidence indicates that they did not use or smoke the plant every day as a common habit.

The plant remained exclusive to peoples in the Americas until the arrival of Christopher Columbus. In fact, it wasn’t long after his arrival that he encountered the leaves of the plant. Specifically, when Columbus arrived in the Bahamas, the natives handed him a gift of dried tobacco leaves. This is documented in Columbus’ journal (or, rather, Columbus’ son, Ferdinand’s, account of the journal, due to the original journal being lost). In this account, Columbus saw a man in a canoe sailing down the river. The entry is dated October 15, 1492:

He had a little of their bread, about the size of a fist, a calabash of water, a piece of brown earth [pigment] powdered and then kneaded, and some dried leaves, which must be a thing highly valued by them, for they bartered with it at San Salvador.

Columbus brought the plant that resulted in these “dried leaves” back to Spain and within 35 years, it was already being noted as something that could intoxicate and lead to a strong dependence. Wrote Bartolome de las Casas, a Spanish friar and historian, in the 1530s, “I have known Spaniards in this isle of Hispaniola who were wont to take (tobacco) and being reproved for it and told that it was a vice, they replied it was not in their power to stop taking (it).”

Europeans (mostly Spaniards, Portuguese, and the French – though Englishmen Sir Walter Raleigh spoke of it in his journal too) used tobacco throughout the last half of the 16th century in a similar way that the Native Americans had, for medicinal purposes and as a pain reliever. In fact, in 1592, the Elizabethan poet Anthony Chute argued in his pamphlet, Tobacco, that the health benefits of tobacco were so great, that doctors were keeping it a secret in order to stay in business.

Spain became the main importer of tobacco from the Americas and even declared their city Seville the “tobacco capital of the world.” All tobacco that went for sale in Europe had to move through Seville, at least according to the Spanish crown. 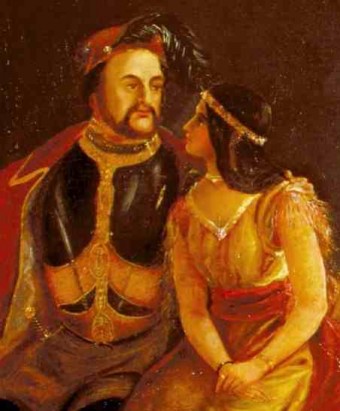 In 1612, to undercut the Spaniards, Englishman and Virginia colonist John Rolfe obtained tobacco seeds from Trinidad or South America (even though the Spanish had threatened death to anyone selling seeds to a non-Spaniard) and planted them in Virginia. Rolfe’s crop became the first known solely commercial tobacco crop in the world. By combining technique, seeds, and soil from different parts of the world, he soon created a tobacco strain that was unlike any other and rapidly took over the market across Europe. In doing so, he also introduced the concept of tobacco brands by calling his Virginia tobacco “Orinoco”.

Rolfe also married the Indian princess Pocahontas, something not without controversy among his fellow colonists. He explained to the local governor that his desire to marry a “heathen” was

motivated not by the unbridled desire of carnal affection, but for the good of this plantation, for the honor of our country, for the Glory of God, for my own salvation… namely Pocahontas, to whom my hearty and best thoughts are, and have been a long time so entangled, and enthralled in so intricate a labyrinth that I was even a-wearied to unwind myself thereout… Shall I be of so untoward a disposition, as to refuse to lead the blind into the right way? Shall I be so unnatural, as not to give bread to the hungry? or uncharitable, as not to cover the naked? Shall I despise to actuate these pious duties of a Christian? Shall the base fears of displeasing the world, overpower and withhold me from revealing unto man these spiritual works of the Lord, which in my meditations and prayers, I have daily made known unto him? God forbid…

Unfortunately, cultivating tobacco was a very laborious process and the Virginia colonies lacked manpower (or, at least, people wanting to do the hard work). In 1619, a Dutch trading ship dropped anchor in the Chesapeake Bay with twenty captured African natives. While there is some contention on whether or not these were the first African lifelong slaves in the British colonies, or whether they were simply forced indentured servants (it is known that some were later granted their freedom with similar terms as other indentured servants of the region), the fact remains that they were sold against their will as laborers to tobacco plantations. (Interestingly, the first legal lifelong slave in these British colonies was owned by one of the early Africans sold against his will as an indentured servant in 1620. He later gained his freedom and prospered only to force one of his own indentured servants, through the courts, to become his lifelong slave.)

In the end, the cultivation of tobacco and the arrival of the aforementioned 1619 trade ship sowed the seeds for slavery in the New World, first with indentured servants, initially mostly Irish, English, German, and Scottish, then gradually shifting to legal lifelong slavery and then a huge influx of African slaves to fill the need for laborers. Ian Gatley even went so far as to state in his book Tobacco: A Cultural History of How an Exotic Plant Seduced a Civilization, “Tobacco was responsible for the introduction of slavery to the New World.”

In any event, by the late 17th century, Jamestown, Virginia was producing 25,000,000 pounds of tobacco per year for sale in Europe. Tobacco became the number one export of the American colonies, from Maryland to Georgia (hence, North Carolina’s “Tobacco Road”). Even George Washington and Thomas Jefferson were tobacco farmers. England, knowing full well that their colonies controlled the tobacco industry, began to depress prices and found ways to tax the product in order to bring in more revenue. To this end, the American Revolutionary War was, at the time, sometimes called the “Tobacco War” due to the financial sway the product had over both countries. The crop held such value that it even helped financed the war, by serving as collateral for the loan Ben Franklin secured from France in the form of five million pounds of Virginia tobacco.

But with its popularity, more and more people started noting the dangers. For instance, in 1791, London physician John Hill wrote about cases in which he observed that the use of tobacco snuff seemed to lead to nasal cancers.

Despite this, tobacco use continued to rise (as well as the use of African slaves as laborers) due to the invention of cigars and cigarettes. Prior to the 1820s, tobacco was most often chewed, smoked in a pipe or turned into snuff. No one is quite sure exactly when and where the cigar was invented, but most likely it had to do with travel and exporting- rolled tobacco leaves in a self-contained tube is much easier to transport and sell ready-to-use than loose leaf tobacco. 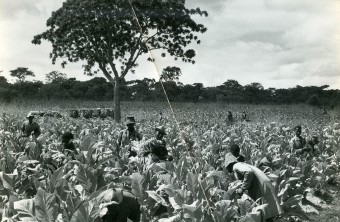 Whatever the case, by 1830, England was importing 250,000 pounds of cigars per year. The United States followed suit and by the 1850s, they were the number one consumers of cigars. As is the case today, Cuban cigars were considered top-notch at this time. As a result, many cigar makers set up shop in Tampa, Florida, close to the Cuban border, and Tampa became known as “Cigar City.”

The Civil War broke out in 1861, in large part due to the “peculiar institution” of slavery, which in turn was largely the result of the need for cheap labor on tobacco, sugar and cotton plantations. Despite the Emancipation Proclamation and the 13th amendment, tobacco plantations still managed to thrive; the world still needed one of its favorite drugs.

This brings us to 1880, when a huge breakthrough occurred that altered how tobacco was consumed. James Buchanan Duke, also known as “Buck Duke,” was the son of a tobacco company owner. When his father retired in the 1880s, he left the company to Buck and his brother Ben. Buck, in order to differentiate the company, began to specialize in the niche tobacco market of hand-rolled cigarettes. At the time, they were not particularly popular. Nonetheless, he opened a factory in Durham, North Carolina and sold these smaller, more portable, and socially discrete items to the rich.

Backing up a little- in 1875, a man by the name of James A. Bonsack built a machine that rolled cigarettes, improving the productivity and cost-efficiency of the product. His machine was able to produce an amazing 120,000 cigarettes in a days’ work.  The original machine was destroyed in a fire, but he rebuilt it and received a patent for it in September, 1880.

This was exactly the type of machine Buck Duck was looking for. He made a deal with Bonsack that if Duke got a severe discount on the lease, he promised to make Bonsack’s machine (and patent) worth millions. That is exactly what happened. Together, they cranked out so many cigarettes that, for a time, the supply was bigger than the demand. No matter, because Duke was a king promoter, spending today’s equivalent of $25 million on sponsoring races, giving out free product, and running newspaper ads. It worked. Despite cigarettes being just a niche product some two decades before, the year 1900 saw over four billion of them sold, with Buck Duke supplying about ninety percent of them.

Smoking and tobacco continued to be popular through the first half of the 20th century. Even then, though, there was some contention among doctors over them, with some declaring tobacco held no risk to one’s health and many more concluding it was dangerous. In fact, several states in the early 1900s had severe limits on tobacco sales and distribution. As the cigarette companies grew and the money became large, these restrictions mostly fell away as the 20th century rolled on. However, the tide started to turn on the debate over whether tobacco was harmful in 1950, when Dr. Ernst L. Wynder published a groundbreaking report in the Journal of the American Medical Association that demonstrated that smoking caused cancerous tumors in mice. And the rest, as they say, is history.