December 1, 2014 Melissa
Karen C. asks: True or false, you should suck the venom out of a snakebite after someone gets bitten? 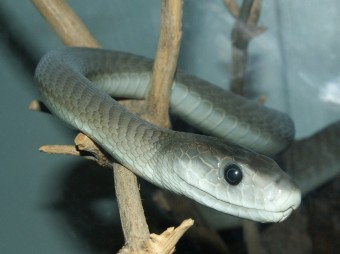 There are a number of productive things you can do to help a snakebite victim; trying to suck out the venom isn’t one of them. Actually having a negative effect, potentially further damaging the tissue around the bite and thus helping to spread the venom, trying to suck the venom out of a snakebite victim is an act in futility that simply delays proper treatment. Once in the body, snake venom quickly spreads throughout the victim’s lymphatic system, and it is just not possible for a human to suck fast or hard enough to remove enough of it to have any real positive effect.

Likewise, experts say applying a tourniquet is equally pointless (it won’t stop the venom), can add to the victim’s pain, and if left on too long, the lack of fresh blood can damage (and even kill) the limb, among other serious health issues this can introduce. Ice is also a common home treatment, but recent studies have shown that it can also make the injury much worse.

Another common misconception is that snakebites are extraordinarily fatal. In fact, even during frontier times only 25% of bites from pit vipers (think copperheads, rattlesnakes and cottonmouths) resulted in death. One reason is that some of these snakebites are “dry,” meaning no venom is injected.

Today, the worldwide rate of deaths from a snakebite is around 0.5-1% of people bitten, due in no small part to the development and distribution of effective anti-venom. For further reference, approximately 8,000 people in the U.S. are bitten by venomous snakes each year, but only about 0.2% die from it (many more people die from allergic reactions to wasp, hornet or bee stings).  This also means you are about nine times more likely to die from being struck by lightning than die from being bitten by a snake in the United States.  Even in Australia where seemingly everything in nature seems capable of killing humans and where 7 out of the world’s 10 deadliest snakes live, there is only about 1 death by a snake bite per year on average.

So what should you do when you encounter a snakebite? Several things, depending on your circumstances.

It should also be noted that while bites from copperheads, rattlesnakes and cottonmouths are sufficiently painful from the start that the victim will ask for assistance, with coral snakes, some victims have made the mistake of thinking the bite caused little harm. According to the National Library of Medicine, it is common for symptoms from the venomous bite of a coral snake to take several hours to appear.

While you’ll usually be fine, so long as you receive proper medical care after being bitten, there is the notable exception of the Black Mamba. Residing in certain parts of Africa, you’ll want to avoid these at all costs. The Black Mamba’s kill rate after a strike is 100% unless very large amounts of anti-venom (typically 10-12 vials) are administered very shortly after being bitten. You don’t have a lot of time with this one.  Given how quickly its venom can kill (as quickly as 10 minutes, though sometimes it takes a few hours, depending on how much is injected; the average time until death after a bite is around 30-60 minutes), around 95% of people still die from Black Mamba bites usually due to being unable to get the anti-venom administered in time.  For reference, one single strike from a Black Mamba will deliver around 100-400 mg of venom and only 10-15 mg is needed to kill a human.

They also usually won’t just strike once, but will continually strike whatever is threatening them as much as they safely can before it stops moving.  If it’s a large, dangerous animal they’re striking, they may only strike a few times in quick succession, then may or may not follow the animal until it dies. If they do follow, they usually will continue to strike only when they see safe opportunities.  As you might expect from this, Black Mamba’s are near top of the food chain, outside of humans.

What’s particularly frightening about this snake, apart from being amazingly deadly and 8-14 feet long, is that the Black Mamba can also move as fast as 14 mph, with an average top speed in the range of 10 mph to 12 mph.  In either case, this makes them the fastest snake in the world.  They can also maintain speeds of around 6-7 mph for lengthy periods.

If all this wasn’t bad enough, the Black Mamba is considered to be the most aggressive snake in the world.  However, it should be noted that even having the reputation of being extremely aggressive, it usually only attacks humans when it feels cornered or when a female is protecting her eggs.  When it does feel like fighting, it’s incredibly fearsome.  Because of its size, ground speed, and agility; how quickly it can strike; how fearless it can appear to be; and how deadly its venom is (I for one welcome our new Black Mamba overlords), it generally takes a group of people working together to kill one, and even then it’s a dangerous endeavor. So you’ll not want to encounter one of these alone, whether on land or in the water.  In both cases, best to have someone with you that you can run faster than!