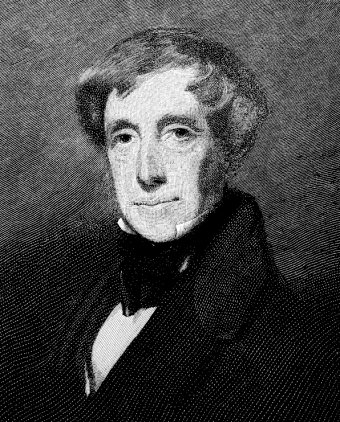 On December 23, 1823, the poem A Visit from St. Nicholas, better known today as The Night Before Christmas was first published. The poem first appeared in the New York Sentinel with no author listed, having been delivered for publication by a friend of Clement Clarke Moore, who was a professor of Greek and Oriental literature and who is generally considered today to have been the author.

Before this poem was published, traditions surrounding St. Nicholas were numerous with no real set, near universally accepted idea of “Santa Claus” like we have today. Elements of the Santa tradition that ended up being popularized by this poem include: the names and number of Santa’s reindeer (Dasher, Dancer, Prancer, Vixen, Comet, Cupid, Donder, and Blitzen, with the latter Donder and Blitzen meaning “Thunder” and “Lightning”); Santa’s means of transportation; that Santa Claus visited houses on Christmas Eve, rather than Christmas Day; the overall appearance of Santa Clause; and that Santa brought toys to children.

One interesting thing to note, however, is that while the general appearance, in terms of the flowing beard, rosy cheeks, etc., of Santa Claus was popularized by this poem, the Santa we know today has had one very big change over Moore’s description- namely that Santa is now big. If you go back and read the actual poem, you’ll note that Moore described St. Nick, (who he never called Santa Clause) as “a little old driver,” with a “little round belly… chubby and plump.” He also described St. Nick riding a “miniature sleigh” with “eight tiny reindeer” that had little hooves. This, of course, explains how St. Nick was able to fit down a chimney without any magical means necessary- he was a tiny little elf.

In any event, although Moore is most likely the author of The Night Before Christmas, there is some very small debate as to whether it was, in fact, written by a relation of Moore’s (distant relation through his wife), Major Henry Livingston, Jr.

To begin with, Moore didn’t claim authorship of the poem until long after it was published, even going so far as to deny having penned it at times when others claimed it was so. It is thought he was initially hesitant to claim it primarily because he was a very well respected scholar and didn’t want to be associated with what is essentially a fantastical children’s poem. However, he was later convinced by his own children to include it in his 1844 anthology of his works and from then on reluctantly admitted he wrote it.

Given that he eventually claimed it and that it is known that the poem was delivered to the Sentinel by a friend of Moore’s (who incidentally is known to have believed Moore wrote it), most historians accept that Moore was the author.

However, Major Henry Livingston, Jr.’s children claimed otherwise. Twenty six years after the poem was first published, and twenty one years after Livingston’s death, his children learned that Moore was taking credit for the poem. They then claimed their father used to recite the poem to them every year starting a full fifteen years before it appeared in the Sentinel, with the first time he read it to them being around 1807. This story was also corroborated by a neighbor of the Livingstons.

So is there any truth to this?

It should be noted that that neighbor in question who affirmed the Livingston-kid’s story also eventually married Charles Livingston, one of the sons of Major Henry Livingston, and was married to him at the time they were making these claims. They also claimed to have once had a copy of the original manuscript, but that it was lost in a house fire. In the end, the only proof the family had was their own story. Given the evidence that Moore wrote it and that Livingston himself never claimed it, most scholars have not taken this claim seriously.