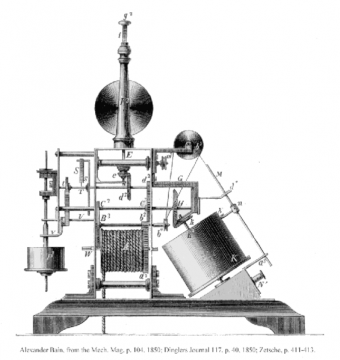 Alexander Bain, a Scotsman clockmaker living in London, was already a decently well-known inventor by the time he got to inventing the world’s first facsimile (meaning in Latin to “make alike”) – or fax – machine. In 1841, he had invented an electric clock by electrifying a pendulum (rather than using springs or weights), while submitting patents for several other useful inventions like improved control systems for railways, automated music machines, and devices to measure how fast a ship was going.

On May 27, 1843, he applied for a patent for a “chemical telegram” and “”improvements in producing and regulating electric currents and improvements in timepieces, and in electric printing, and signal telegraphs,” in which “a copy of any other surface composed of conducting and non-conducting materials can be taken by these means.”

His new invention used the newly popularized telegraph (the electrical telegraph, which was patented by Samuel Morse in 1837) as its base and then added electromagnetic pendulums (like his clock) that would scan the image and puncture a chemically treated paper with lines and tics, which would then be interpreted by a telegraph operator.

Bain’s initial version of the fax machine essentially was a written telegraph and this wasn’t lost upon Samuel Morse. Morse and Bain became embroiled in a patent dispute that eventually was ruled in Morse’s favor. Journalists of the time wondered out loud that since the dispute was taken up in US courts and Morse was American, that the ruling had a bias. In fact, one even went as far as to jokingly state that Bain should never bring his children to America because if he did, Morse would surely claim them as his own too.

Bain submitted another patent for the chemical telegram in 1846 with improvements to his invention that included sketching out and sending facsimile images. It used the same premise as before, but now the paper was treated with a mixture of ammonium nitrate and potassium ferrocyanide, so when electrified, the paper turned blue. (See: Why Blueprints are Blue.) Again, Morse blocked the patent. Within a few years, Bain would further improve his machine, resulting in a version capable of copying approximately 325 written words per minute, about 8 times what Morse’ telegraph system could do. However, by this time, other inventors were getting into the facsimile game with even better designs and Bain’s career was basically over. He would die in poverty in 1877.

This brings us to Frederick Bakewell who received a patent for his improved “image telegraph,” which essentially replaced the pendulums with synchronized rotating cylinders. He was able to send the first certified “telefax” with actual words and images. He demonstrated it at the Great Exhibition in London in 1851, but it wasn’t met with much enthusiasm due to the very long time it took to copy and transmit. Plus, as with Bain’s system, it suffered from synchronization problems.

Italian physicist Giovanni Caselli focused his work on making sure the cylinders stayed synchronized. He succeeded with his invention, the pantelegraph, which used a regulating clock signal to keep both ends in perfect synchronization. With Caselli’s device, first, a message or image would be written in non-conductive ink on a piece of tin. The thin tin sheet would then be scanned by an electrified transmitting stylus, attached to telegraph wires, going back and forth across the sheet. When the stylus encountered the non-conductive ink, rather than the tin, electrical conduction stopped. A very similar apparatus was placed on the receiving end, except this had chemically-treated paper and an electrified stylus (similar to what Bain had done), which would contact the paper where the conduction stopped on the sending side, creating an exact replica of the message. Thanks to his advancements in synchronization, Caselli had created the first reliable fax machine.

Caselli was so confident in it, he demonstrated it for the French Emperor Napoleon III in 1860. The Emperor was astounded with what he saw – the signature of well-known French composer Gioacchino Rossini transmitted over a 140 kilometer long telegraph line between Paris and Amiens. To ensure its viability, the Emperor asked for another test. So, Caselli sent a message between Paris and Marseille, which had 800 kilometers separating them. It worked. Napoleon III accepted the pantelegraph for use by law across France. A year later, Russian Tsar Nicholas I used the pantelegraph to send messages between his palaces in Moscow and Saint Petersburg. Unfortunately, the French-Prussian war of 1870 caused many telegraph poles to come down across both countries and forced the pantelegraph to cease operations. But the technology was here to stay.

Improvements continued on the image-creating telegraph with Bernhard Meyer using a drum to double the speed of the previous pantelegraph. In 1888, Ohio-born Elisha Gray received a patent for the telautograph, a unit that had horizontal and vertical bars that further quickened the pace. Foster Richie created the telewriter, which could be operated on the newly-built telephone lines that stretched across America, allowing for both speech and copies simultaneously.

The first wireless fax was sent, using radio-waves, in 1924. Richard Ranger worked for the Radio Corporation of America (RCA) when he sent an image of President Calvin Coolidge on November 29, 1924 across radio-waves. Also all the way back in 1924, the first color fax was sent by Herbert Ives of the American Telephone and Telegraph Company (AT&T).

Despite reliable fax machines (even wireless and color) being around for quite some time, it wouldn’t be until 1964 when fax machines were widely used commercially. Xerox, a Rochester, New York based company, developed the “Long Distance Xerography” which connected copiers in offices via telephone lines. It would take a few years, but Xerox fax machines soon were the mode de jour to send and receive documents. And the rest, as they say, is history.