June 25, 2014 Kathy Padden
Hannah asks: Why do we kiss? Is this something built in or do we just do it because we see others do it our whole lives? 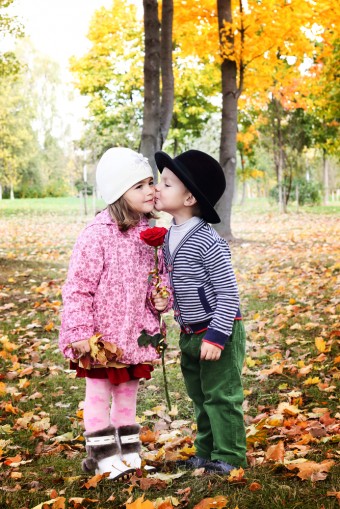 Making Out. Snogging. Canoodling. Kissing. An activity that is teetering on the edge of gross when viewed objectively, but one that most everyone enjoys in practice. But why do we kiss? What compels us to attach our lips to the lips of another human being? Or push the envelope even further and do the microbial tongue tango?

Kissing has been a noteworthy activity throughout history. The earliest literate culture, the Sumer, described both standard and tongue kissing in their poetry. The couple thousand years old Indian Kama Sutra, the ancient guide to getting-it-on, devotes an entire chapter exclusively to various modes of creative lip-locking. Herodotus mentioned kissing among the Persians, who greeted those of equal status with a non-romantic kiss on the mouth, but those of lower rank with a kiss on the cheek. He also pointed out since the Greeks ate cow meat, Egyptians would not kiss them on the mouth because cows were sacred to them.

During the days of the Roman Empire, everyone kissed everybody, and your social status could be noted by where on the body you could lay one on the Emperor.

Things changed dramatically with the rise of Christianity. Kissing for romantic purposes disappeared in many cultures (at least publicly) for several hundred years until it re-emerged in the 11th century under the guise of courtly love. Star-crossed lovers like Shakespeare’s Romeo and Juliet personified the double-edged sword of unfettered romantic love – exciting and liberating but also ill-advised and dangerous.

But why does kissing feel so good that we’re often willing to throw good sense and hygiene out the window? Is kissing learned or instinctual behavior?

Well, why not elements of both?

Those who believe it is, at least in part, a learned behavior postulate that it perhaps got its start at a time when our ancestors were using their tongues to shove our dinner down our throats for us. (Lacking a KitchenAid or Gerber, it was an effective way to pre-process and serve non-milk food to infants.) Besides semi-solid food delivery, it is also speculated that there may be a link between the pleasures associated with kissing to the feeling of comfort of feeding as infants. For babies, nursing is not only necessary for nourishment but important for bonding. It is thought that perhaps these early memories of our mouths on mammaries forge strong subconscious associations between the mouth and security, attachment and a form of love.

A major fact supporting the theory that kissing is, at least in part, learned, rather than instinctual, is that besides historical examples of cultures who didn’t kiss at all (of which there are many, and even more if you just look for cultures who didn’t kiss for romantic purposes), even today roughly 10% of humans, particularly divided on cultural lines, do not engage in the act of kissing.

And yet 90% of us do kiss. So why have humans become seemingly pre-disposed to enjoy the behavior once we do learn it (and get good at it). I mean, normally you’d think humans would have evolved away from any exchange of germs that wasn’t strictly necessary, particularly at the level that happens when we kiss.

Beyond any baby/mother associations and bonding mentioned before, the major consensus is that despite the risk of acquiring a disease from the exchange, kissing helps us (literally) sniff out the best possible mating partner. (In some cultures where romantic kissing, or even kissing at all, isn’t a thing, nose rubbing or just smelling is often done instead.) When two people’s faces are close enough to kiss, getting a whiff of each other’s pheromones can alert them on a chemical level if someone is worth pursuing. Women particularly have been shown to subconsciously be sexually attracted to the scent of a man whose genes, coupled with her own, will create offspring less prone to diseases and with less likely of miscarrying. So getting in close for a good whiff just makes genetic sense.

That said, it’s interesting to note that studies have shown that while both sexes typically like kissing in general, men are more apt to favor pre-sex kissing – when its purpose is geared more toward sexual arousal and potential genetic compatibility, while women tend to favor kissing after sex – when its function is to promote bonding and attachment… and men just want to take a nap. (It’s also interesting to note that water is wet.)

It turns out, the hormones your body releases during kissing change over the course of your relationship. Kissing a new partner stimulates the release of dopamine, which creates that “new love” sense of excitement and desire (and stupidity). On the other hand, your brain releases oxytocin when you’ve been kissing the same partner over a period of time, and this encourages attachment, bonding and a capacity for endless TV watching between couples in long-term relationships.

As an added bonus, it’s been found that in cultures that engage in kissing, couples in long-term relationships who kiss each other often report more healthy, happy and satisfying relationships. The same cannot be said for couples who only have a lot of intercourse, but forgo much in the way of kissing. Kissing, it would seem,  is a far more intimate act than sex for most, which if Pretty Woman has taught me anything is something known by prostitutes the world over.

Beyond everything happening chemically during a kiss within the body, let’s face it, for most people, kissing feels good. The human tongue and lips are jam-packed with nerve endings, and smooshing them up against someone else’s tongue and lips who really gets your motor running isn’t a bad way to kill some time, even despite the billions of bacterial cells you’re likely exchanging. (You can only surf the web so much. I know. Burn the witch.)

So, in the end, while there are certainly examples of cultures who forgo kissing completely, there are very definite physiological and evolutionary benefits to risking the lip-smacking microbial mambo, even if it isn’t necessarily purely instinctual.