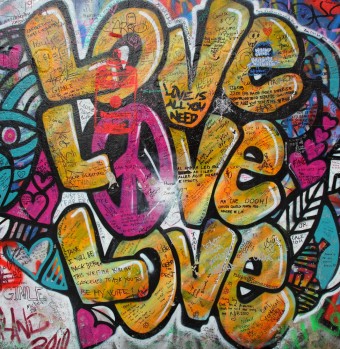 Barbara Baker’s earliest recollections of John Lennon were of little John perching up in a tree and shooting arrows at her and all the other girls passing by.  Later, she also recalled encountering Lennon’s youthful “charm” one day as she was walking home, her hair done up in a ponytail. “Oh there’s horseface! Horse’s tail and horse’s face!”  He was good with the ladies even then…

Whether she was really ever a “horseface,” she eventually grew into a beauty, according to John’s half-sister, Julia. “She was like a film star, with lots of long, blonde hair and glamour.”  (Contemporary photos reveal that, in truth, Barbara was a real blonde knockout with an hourglass figure.)

As she matured, she caught the eye of John Lennon, a typically lascivious 16-year-old, whose fantasy girl was movie sex kitten Brigitte Bardot.

In spite of his earlier rude behavior, now in their teens, John spoke in a more civilized manner and asked if he could take her for a walk a few nights later.  Barbara accepted and so it was that they took their first jaunt together, neither one realizing it was to be a seminal moment in both of their young lives.

On another day, during a walk at a local park with a friend after Sunday School, Barbara later recalled seeing two suspicious-looking lads following them covertly. It was John and his pal, Len Garry. The two boys approached the girls. After a bit of teenage flirting, Barbara claims they asked her to choose which she wanted to go out with.

Barbara and Len went out briefly, but John and Barbara kept catching each others’ eyes. Finally, she dropped Len and began dating John. And thus it was that Barbara Baker became John Lennon’s first girlfriend. (Len harbored no hard feelings and remained close pals with Lennon.)

As you might imagine, John was hardly the “attentive” boyfriend a young girl dreams about. At the time, John was always busy, running around, rehearsing, and trying to get gigs for his new band, The Quarrymen. (The Quarrymen were John’s original band and were the early genesis of the Beatles.)

Besides the distinction of being John Lennon’s first steady, Barbara Baker was witness to musical history. She was in attendance at St. Barnabus church for the occasion of John’s public singing debut, cheering on her would-be young Elvis as he and his fellow Quarrymen sang their first tunes in public.

The relationship was, in some ways, a classic 1950s stereotype. The two would go bicycle riding together or go ice skating at Liverpool’s “Silver Blades” skating rink. But life with John Lennon was never quite “idyllic.”

John’s half-sister, Julia, recalls Barbara often calling on John and being told by John’s Aunt Mimi or John’s mother that John wasn’t in, sometimes whether he was or not. (Aunt Mimi mostly raised John; his mother lived in another house. Barbara would go to Aunt Mimi’s and be told John wasn’t home. Then she’d go to John’s mother’s house and be told the same thing. Julia remembers Barbara fruitlessly having to walk the considerable distance from house to house to save on bus fare.)

Barbara would patiently wait- and wait and wait and wait outside the house in hopes of catching John when he finally arrived home.  “That poor girl,” Julia remembers her mother saying about Barbara’s plight.

According to Len Garry, Barbara wasn’t just John’s first girlfriend, but also his “first.” After doing the deed, John supposedly described his first “conquest” with Barbara to Len, who stated, “His report was none too flattering.”

John was 16 at the time- a very thoughtless, immature, and often cruel 16, at that. Indeed, Barbara was to recall, on a few occasions, John having sex with her in the same bedroom his pal, Len, was using for the same objective at the same time with his girlfriend. For comfort’s sake, sometimes in their amorous pursuits, Len, John, and their respective girlfriends, all shared the same bed.

John, admittedly, hardly treated Barbara in a very courteous manner. Julia was to remember Barbara “waiting around” for John to come home one day while John was actually at home in his mother’s house. John couldn’t be bothered.

But Barbara seems to have held no grudges about her time with John. “He was a very romantic boy, extremely romantic. He wrote pages and pages of poetry to me…. [He would say,] ‘Here, I’ve written you a letter, a poem. Read it!'”

Always the artist, John also drew pictures and presented them to Barbara.

After about a year of dating, as you might expect from the overall way he treated her, Barbara’s interest in John waned and she started dating a friend of his, Bill Turner, behind his back. She stated, when he found out,  “John went crazy. He nearly kicked the fence in that night. He was absolutely brokenhearted.”

The two lovebirds got back together.

Of course, John dropped Barbara for a short while too, and started dating a girl named Margaret Jones. But soon they got back together again.

According to Barbara, it was actually her parents and John’s Aunt Mimi who got together and put the kibosh on the young lovers’ budding relationship. “They sort of made us give it up,” said Barbara. “They made us split up.”

The two star-crossed lovers still dated secretly for a brief time, but by this time John was a bit more “grown-up,” relatively speaking, and was attending the Liverpool College of Art.

John soon met and lost his heart to a fellow art school student, a pretty brunette named Cynthia Powell, who was to become his first wife.

Of Barbara Baker, Julia was to recall, “She was his first fully-fledged fan.”

According to Len Garry, “John thought the world of Barbara.”

As we all know, John Lennon was to go on to reach unimaginable levels of riches, fame, and success. He lived, as he once himself said, “a hundred lives in this one.”

But John was also human, and like any guy (or girl), he was never to forget his first lover. In 1978, over 20 years after their teenage relationship ended, John was to say (in a strange, but fairly revealing interview), “Barbara, where are you? Fat and ugly? 15 kids? Years of hell with me should have made you ready for anything! What’s so sad about the past is that it’s passed. I wonder who’s kissing her now?”