This Day in History: April 2nd 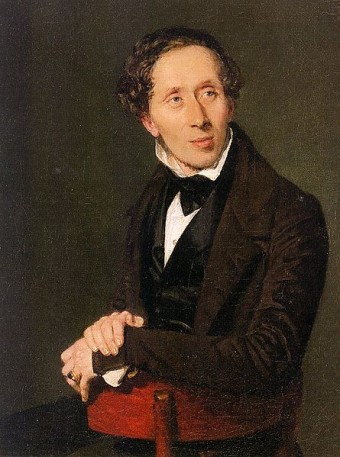 Hans Christian Andersen was born on April 2, 1805 in Odense, Denmark to a cobbler and a washerwoman. Although they were poor, his parents doted on him and encouraged him to develop his imagination by putting on puppet shows and making up his own stories. His mother introduced him to the world of folklore before she slid into full-blown alcoholism.

When Andersen was 14, he set off for Copenhagen to become an actor, singer or dancer. He had little success, but made valuable connections during his time as a struggling performer. The Royal Theater’s Jonas Collin provided Andersen with a grant to attend Copenhagen University, and during this time he began writing poems, plays and stories. In 1827, his first poem, “The Dying Child,” was published in the Copenhagen Post.

Starting in 1831 Andersen traveled widely, meeting other creative souls such as Victor Hugo, Heinrich Heine, Charles Dickens, Balzac, and Alexandre Dumas along the way. His autobiographical breakthrough novel “The Improvisatore” was published in 1835. It became an international hit and the mostly widely read of all his works.

Andersen’s main claim to fame today is, of course, his “Fairy Tales and Stories.” Thanks to these stories written mainly between 1835 and 1872, Andersen is often called the “Father of the Modern Fairy Tale.” Only 12 of these stories are known to be derived from older folktales, the rest are thought to be completely original.

Poorly educated, Anderson never learned how to write formally or spell in Danish proficiently. As a result, his writing style is very conversational, making his work still sound fresh to the modern ear, unlike other authors of his time. His strong identification with the outcasts and unfortunates of society made Andersen’s tales very compelling and believable. Many of his stories, such as “The Ugly Duckling,” have the hoped for happy ending, but others like “The Little Match Girl,” do not.

The famous opera singer of the time, Jenny Lind, was the last in a long string of unrequited loves in Andersen’s lonely life. “The Ugly Duckling” was her favorite among Andersen’s fairy tales because it reminded her so strongly of herself as a young girl. (She is said to be the inspiration behind the “The Nightingale” – she was known as the Swedish Nightingale.)

Andersen didn’t think much of his fairy tales initially, and considered them of little worth artistically and intellectually. But over time, he reconsidered his position and began to see fairy tales as “universal poetry,” or poetry that crosses all cultural boundaries. He envisioned them as a form of poetry that combined literature and folk art to describe both the comedic and tragic aspects of life in a way both adults and children could enjoy, understand and be entertained by.