This Day in History: April 3rd 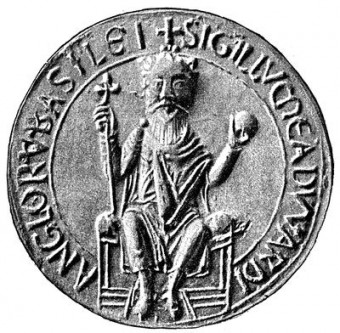 Edward the Confessor was born in 1003 to King Ethelred the Unready and his second wife Emma, the sister of Richard, Duke of Normandy, and was the last Anglo-Saxon king to sit on the throne of England. He was responsible for the building of Westminster Abbey, one of the great churches of England, and where many of her most illustrious monarchs and distinguished personages were laid to rest.

When Edward entered the world, his dad was keeping busy trying to offset the Viking invasions that kept popping up all over England’s coastlines. He managed to hold them off for over a decade, but when Edward was ten, King Ethelred was deposed and the Royal family was exiled in Normandy under Uncle Richard’s protection.

Aethelred regained England’s throne in 1014, but for some reason sent Edward back to represent him. This was quite the dangerous undertaking for such a young kid, but he appointed himself so nobly that the Witan, or Council forbade any future Danish kings in England.

But only two years later King Ethelred was dead, and his son from his first marriage, Edmund Ironside, was fighting to keep the English throne from the Danish King Cnut. Then Edmund bought the farm in 1016, and Cnut talked the Witan into handing over the English throne to him. So much for the “no more Danish kings” thing.

King Ethelred’s widow and Edward’s mom saw her chance to stay in the spotlight, and married the new King Cnut. She made her new husband swear that no other sons save the ones they would have together would inherit the throne, kicking Edward and younger brother Alfred to the curb and forcing them into exile (again). In 1018, she had another son, Harthacnut, who became mommy’s little favorite.

While Edward and Alfred hung out in Normandy, King Cnut died in 1035 and his illegitimate son Harold Harefoot showed up and tried to snag the throne (General Hospital had nothing on medieval England people – try to keep up.) But Queen Emma more or less said “Not on my watch, bub,” and held the fort for Harthacnut, who was taking his sweet time coming back from Denmark.

The following year, Edward and Alfred gathered forces and headed home to England. When Edward saw how outnumbered they were, he scampered back to Normandy, but Alfred did not, and was met by Godwin, Earl of Wessex, who did not want Alfred to join forces with Harold Harefoot. To make sure that didn’t happen, the earl decimated Alfred’s forces, took him prisoner, mutilated him, gouged his eyes out and left him to die slowly and horribly. Subtlety was obviously not his strong point.

After all this, even the famously patient English had grown tired of this endless nonsense from their supposed betters. Harthacnut finally won the throne – for a few months – until he died in June 1042 at a Bacchanalian wedding celebration. A very regal way to go.

Edward was still in Normandy when he heard this “tragic” news. He immediately set sail across the channel and, at long last, the Witan elected him king (yes, that’s how it was done in those days.) He was crowned on April 3, 1045 at the Old Minster at Winchester.