This Day in History: April 1st 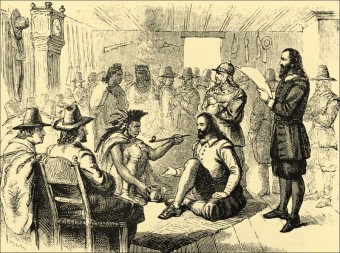 On April 1, 1621, the first peace treaty between the American colonists and the Native Americans was made in Plymouth, Massachusetts. The process began when Samoset, Squanto, and three companions paid a visit to the colonists’ tiny colony. They informed the newcomers that the great Sachem Massasoit, his brother Quadequina and about 60 men were in the area.

The Pilgrims would not send their governor, John Carver, to meet with them, and the Native Americans were likewise unwilling to yield to the colonists. After mutual assurances, gift-giving and finally hostage-taking, Captain Standish, William Brewster and six musketeers met Massasoit at a brook where they faced each other and saluted.

With Standish and Brewster flanking each side of the Native American king, they led him into a house with several cushions on the floor. Governor Carver immediately entered the house followed by drum and trumpet and several more musketeers. The Governor kissed Massasoit’s hand and Massasoit returned the gesture, then both men sat down.

Governor Carver ordered that some “strong water,” be served so he could toast the great Sachem Massasoit, who broke out in a sweat when he sampled the liquor. Massasoit was much more impressed by the Governor’s trumpets, and some of his men sounded them as best they could.

Soon enough they got down to business and negotiated a peace treaty. Partial, but crucial, terms included:

Years later, it came to light that the Wampanoag wasn’t the only tribe responsible for this peace treaty, but instead there were ten other Native American tribes in the area lending their support to the alliance.

On November 13, 1997, which Massachusetts Governor Paul Cellucci officially announced as Massasoit Compact Day, an official proclamation was released, which stated:

The Old Plimoth Indians gave their lives to protect Pilgrims and the development of democracy under the Grand Sachem Massasoit, ten tribes, including Blacke Tisquantum of the Assowomsett, Cawnacome of the Manmomett, Squanto of the Patuxet, Ohquamehud of the Nausets, Obbitima and Chicataubut of the Massachusett, Nattawahunt of the Connecticut, Caunbitant of the Pocasset, Huttamoiden of the Socasset, Appanow of the Capwack, which made up the Indian Nation of the Totem of the Wolf.”

The peace treaty was a great success, lasting more than five decades.