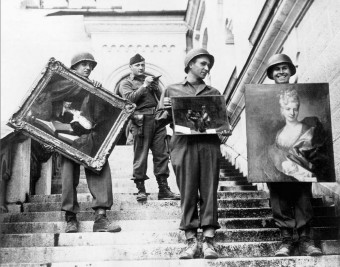 War is ugly. Especially in contrast to the beauty of centuries-old European art. That was the very the reason that the Monuments, Fine Arts, and Archives program was established in 1943, to protect fine works of art in every form from the horribleness of World War II. The men and women who were part of this program and assigned to the task of preserving, restoring, finding, and returning these priceless works of art became known as “The Monument Men.”

By 1943, Europe was in the throes of perhaps the most destructive war of all time. Casualties were in the millions. Hitler was attempting to erase a whole ethnicity of people from the planet. Centuries-old, major European cities, like London, Naples, and Berlin, were being reduced to rubble. Churches, castles, and bridges that had been around since the Renaissance and before were being rendered no more by 20th century weapons. World War II’s destruction paid no respect to the history that this part of world had amassed over the multiple millennia. Something had to be done about it.

The idea of establishing an official national body to protect threatened works of art came from a group of Harvard professors, the American Council of Learned Societies, and the heads of the Metropolitan Museum of Art (in New York City) and the National Gallery of Art (in Washington DC). Together, they approached Supreme Court Chief Justice Harlan F. Stone, who was also on the board of the National Gallery of Art, with a proposal for a Federal commission, whose mission would be to protect and take back art from the Nazis. Chief Justice Stone took the idea to the President and on August 20, 1943, President Franklin Roosevelt established, with presidential approval,the “American Commission for the Protection and Salvage of Artistic and Historic Monuments in War Areas ,” otherwise known as the Roberts Commission. The British soon followed suit with a similar commission in May 1944. The commission would go on to operate for nearly three years, and including a year after the conclusion of the war, until June 30, 1946.

The mission of the Federal commission, according to the National Archives and Records administration, was to “assist the U.S. Army in protecting cultural property in Allied-occupied areas and to formulate restitution principles and procedures.” With an original operating budget of twenty five thousand dollars (or about $357K today) for the first year from the President’s emergency fund, the nearly three hundred art historians, architects, museum directors, and archaeologists were sent out across Europe to achieve their objective.

Another, somewhat known, reason that both the American and British governments took great interest in the location and ownership of European valuable works of art was that the Nazis had the potential to use them to finance “subversive activities” both during and after the war. In 1942, the Office of Strategic Services (the OSS) was established. A precursor to today’s CIA, according to the National Archives, the OSS worked very closely to track the movement of these “assets.” The capturing of these assets would hinder Germany’s financial backing of the war effort. Additionally, as documented and exposed by former US ambassador to the European Union Stuart Eizenstat in the 90s, the Nazis were looting a good chunk of this artwork from Jewish people, as they were systematically trying to kill them off. The Nazis were using stolen assets from Jews as collateral to finance (with complicit Swiss banks) the killing of them and their families.

While the movie makes it look like that these men and women traveled and performed their duties together, according to US News & World Report, this wasn’t true. More often than not, there was so much ground to cover and limited funds, individuals had to go searching in the war zone by themselves. Not only that, transportation was very hard to come by and even if a car or ride was procured, roads were in such bad shape, that just getting to a location could be impossible.

Take for example the man Matt Damon’s character is apparently based on, Lt. James Rorimer, who was director of the Metropolitan Museum of Art and expert in medieval art (while at the MET, he opened the Cloisters to exhibit their vast collection of medieval art. He was the curator who obtained the Unicorn Tapestries, evidence to some that unicorns existed. They still hang in the museum today). Rorimer landed at Utah Beach, two months after D-Day, and inspected the damage done to historic buildings throughout Normandy. He got around by hitching rides with military vehicles and French civilians. When he couldn’t do that, he walked. At one point, he was accused of being a German spy by an US officer, simply because the officer couldn’t accept that Rorimer was in Normandy alone and without transportation.

Being a “Monument Man” was, as one could imagine, very dangerous work. Fortunately, only two members of the commission died while in action. One was Ronald Edmund Balfour. A British medieval historian from King’s College in Cambridge, Balfour was assigned to Northern France, Belgium, and Northwest Germany. Like many of his fellow officers, he walked from place to place, from artworks to historic chapels. He’s credited with reporting that the Nazis had stolen Michelangelo’s Bruges Madonna from the cathedral in Bruges. In early 1945, he was in the city of Cleves in Germany, when he begged the Canadian army not to blow up a historically significant medieval city gate. They made no promises, so Balfour and several German civilians attempted to extricate it, along with several church artifacts. A shell burst exploded, killing Balfour. In his will, he left his eight thousand medieval book collection – described by him as his most significant possession – to King’s College. There’s been substantial outcry that neither Ronald Balfour, nor a character based on him, is featured in the movie.

Throughout the war, “The Monuments Men” found artwork that was looted by the Nazis stashed away in pretty obscure and hidden locations. They found items in Italian villas, salt mines, and, famously, in the Neuschwanstein Castle, where it took nearly a year for Allied forces to get every item out of the castle.

Another reason besides securing financial assets (as detailed above) that Hitler wanted to collect all of these items was because he wanted to open a museum dedicated to himself. As the legend persists, Hitler was a failed artist, but fancied himself an art connoisseur. So, he had his soldiers loot as much fine art as they could, so that he could one day open up a museum in his hometown of Linz, Austria entitled “Fuhrermuseum.” It was actually part of a greater plan to turn the small city of Linz into the culture center of the Third Reich, complete with a theater, an opera house, and the “Adolph Hitler Hotel.”

Even after the war, the commission continued its work. There was still much art to be found, recovered, and sent back to their rightful owners. Probably the most significant find from after the war, according to the Smithsonian, was the discovery of stained-glass windows from the cathedral of Strasbourg, France. At the orders of General Dwight D. Eisenhower, who was well-known in military circles to be a big supporter of the monument men’s mission, the windows were sent back to the United States for repair. They were returned to France in the early 1950s as beautiful as ever.

Despite the great work done by these brave soldiers, they couldn’t do everything. According to historian Marc Masurovsky when he spoke to NPR, they could only recover ten percent of what went missing, either due to destruction or looting. The “Monuments Men” simply didn’t have the resources to go after everything. Additionally, they made mistakes, especially when it came to determining the rightful owners of certain works. One such high-profile case was a collection that included works from Picasso and Marc Chagall. In 2012, it was discovered in a Munich apartment in the care of Hildebrand Gurlitt’s son. Hildebrand was an art dealer who was known to have worked with and for the Nazis. The collection was valued at nearly one billion euros.