A Brief History of the Apple Tree 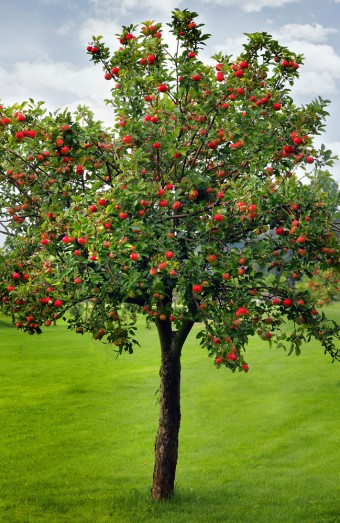 An integral part of the American experience, “As American as Apple Pie” (which in truth is not American), the apple is nevertheless ubiquitous in U.S. culture. We put it in desserts, give it to our favorite teachers, wash our hair with its essence and put it in our lunches. So common, it’s easy to take the simple apple for granted, but it actually has a rather interesting history.

A Member of the Rose Family

Otherwise known as Malus domestica, the apple is a member of the Rosaceae family, and its siblings include the strawberry (Fraaria L.), the plum (Prunus L.), the pear (Pyrus L.), the blackberry (Rubus L.) and the rose (Rosa L.).

Common characteristics of this family include blossoms with a hypanthium (a floral cup on the flower), radial symmetry, 5 distinct petals, and many stamen and stipules (leaf-like structures).

Recent scholarship has shown that the modern apple we enjoy today started initially with the wild apple species M. sieversii that later intermingled with M. sylvestris.

On an apple blossom, the parts that turn into the fruit we eat (called the “pome”) are the “basal portions of the petals, calyx [sepals], and stamen [composed of an anther and filament] . . . fused into hypanthium tissue and attached to the ovary [which is] below [the other parts].”

Apples blossoms have to be fertilized, and each blossom has both male and female parts. The stamen, with its anther and filament, is male, while the ovary and stigmas are female.

Each apple’s life begins with a bud that slowly develops leaves, then a blossom. When the blossom opens, the stamen (with the pollen-rich anther) is exposed, as is the base of blossom where the nectar is located.

Bees and other pollinators seeking out nectar brush against the anther and inadvertently pick up pollen. As the bee moves from blossom to blossom drinking nectar, some of its hitchhiking pollen is rubbed off on the blossom’s stigmas [which transfer the pollen to the ovary].

Once fertilized, the blossom’s anthers (which have shed their pollen) along with the petals shrivel up and the latter falls off. Next, the stamen dries up and the fruit quickly develops underneath the sepals [which ultimately become the brown bits opposite the stem on a ripe apple].

The naturalist Henry David Thoreau noted the close relationship between people and apples, since before recorded history:

It is remarkable how closely the history of the Apple-tree is connected with that of man. The geologist tells us that the order of the Rosaceae, which includes the Apple . . . were introduced only a short time previous to the appearance of man on the globe [and] . . . traces have lately been found at the bottom of the Swiss lakes [with people] supposed to be older than the foundation of Rome . . . The apple was early so important, and so generally distributed, that its name traced to its root in many languages signifies fruit in general . . . .

The Greeks and Romans introduced the domesticated apple to North Africa and Europe during their trading and conquests. These fathers of western civilization were equally impressed with the fruit, using it as a central device in some of their most lasting stories, like this myth from about 700-800 BC that explains the roots of the Trojan War:

All the gods were invited [to a wedding] with the exception of Eris, or Discord. Enraged at her exclusion, the goddess threw a golden apple among the guests with the inscription, “For the most beautiful.” Thereupon Juno [Hera], Venus [Aphrodite] and Minerva [Athena], each claimed the apple. Jupiter [Zeus] not willing to decide in so delicate a matter, sent the goddesses to . . . the beautiful shepherd Paris . . . and to him was committed the decision. . . . Juno promised him power and riches, Minerva glory and renown in war, and Venus the fairest of women for his wife [Helen] . . . . Paris decided in favor of Venus and gave her the golden apple . . . . Under [her] protection . . . Paris sailed to Greece [and] . . . aided by Venus, persuaded [Helen] to slope with him, and carried her to Troy. . . .

It was because of the Greek usage of the apple in many tales that the forbidden fruit in the Garden of Eden is so often depicted today as an apple.  Aquila Ponticus, who was a second century translator translating the Old Testament from Hebrew to Greek, took the liberty of translating it as an apple tree, even though the original text doesn’t say that.  He did this because he was translating it into Greek for Greeks, and, as alluded to, in Greek mythology apples were seen as symbols of desire and destruction.

The crab apple tree is the only malus species native to North America and likely greeted the first European explorers, who found the tart fruit a poor substitute for Malus domestica. This is likely why the settlers of Jamestown brought apple tree cuttings and seeds with them when they founded the colony.

Notably, however, most apples during colonial times were not eaten, but were instead used to make cider. More than just a treat, cider was commonly served, even to children, since reliably safe drinking water was a rarity in the early colonies.

In order to grow the young country, many colonies (and later the states) set requirements before granting land rights (known as patents) including the mandate to improve the land (called “seating and planting):

The act defined . . . with great particularity, what should be deemed sufficient seating and planting. The patentee was required . . . to clear and tend three acres, or to clear and drain three acres of swamp , or to . . . there keep . . . cattle . . . sheep or goats. [For] every £ 5 expended in . . . planting trees . . . should save 50 acres [of unimproved land, also granted with the patent].

Since apples were so useful, among the trees most planted were at least two apple trees since the species needs “a second tree for cross-pollination to occur.”

Obviously, it would be difficult for settlers in the Northwest Territory (in colonial times, this meant northwest of the Ohio River) to drag seedlings along in the late 18th and early 19th centuries. Having learned the apple business as a young man in Massachusetts, John Chapman brought his knowledge to western Pennsylvania and started his own apple tree business in about 1801.

Planting seedlings near creeks and rivers close to where new land patents were being granted, Chapman provided the settlers with the apple trees they needed to improve their land. Working for 50 years throughout Pennsylvania, Ohio and Indiana, Chapman was responsible for so many apple trees and orchards, he earned the name Johnny Appleseed.