The Current Version of the U.S. Flag was Proposed by a High School Student Who Initially Received Only a B- for His Design 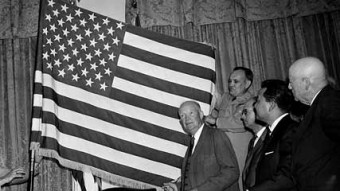 Today I found out the most recent version of the United States’ flag was designed by a high school student who initially received only a B- for his proposed design.

In his own words shortly before he died on Dec 12, 2009, Bob Heft recounted to StoryCorps the tale of his design being chosen among about 1,500 submitted to become the 27th (and since 2007, the longest running) official U.S. flag:

In an American history class, we had to do an outside of class project. We could make or do whatever we wanted, like a science fair or something like that where you bring your project in.

The Betsy Ross story intrigued me.  My Mom and Dad had a 48 star flag they received as a wedding present, which of course meant a lot to them.  Well, I took scissors and cut it up.  I had never sewn in my life.  I watched my mom sew, but I’d never sewn.  And since making the flag of our country, I’ve never sewn again.

So anyhow we get to class, I had my flag on my teacher’s desk.  The teacher said, “What’s this thing on my desk?”  So I got up and approached the desk, and I’m shaking like a leaf and he says “Why have you got too many stars?  You don’t even know how many states we have.”  (He had added more for the potential new states of Alaska and Hawaii being added to the U.S.)  And he gave me the grade of a B-.

Now, a B- wasn’t that bad of a grade.  However, a friend of mine, Jim, picked up 5 leaves off the ground, he’s taping these leaves down to a notebook and labeled them elm, hickory, maple, and the teacher gave him the grade of an A.

I was really upset, teacher said, “If you don’t like your grade, get it accepted into Washington, then come back and see me and I might consider changing your grade.”

Two years later, I’d written 21 letters to the White House, made 18 phone calls, now you can imagine when my mom got the phone bill.  “What’s this number?”  I said, “Well, mom that’s the White House.”

(Though he doesn’t mention it in this specific interview, he mentions in others that he gave his flag to congressman Walter H. Moeller, who then tirelessly promoted it in Washington and was instrumental in getting it accepted)

So anyhow, I got this call and they said “The President of the United States is going to call you later today.”

Well, at that time, Eisenhower was president, and he comes on the phone and he says, “Is this Robert G. Heft?”  And I said, “Yes sir, but you can just call me Bob.”

And he says, “I want to know the possibility of you coming to Washington D.C. on July 4th for the official adoption of the new flag.”

The primary change made in Heft’s design over the previous flag design was simply in the layout of the stars.  In Heft’s design, he changed the 6 rows of 8 stars (that one year later would become 7 rows of 7 stars), to an arrangement of alternating five rows of six stars with four rows of five stars.   While one can see how his teacher would have given him a low grade for such a minor change, Heft felt this would be critical to getting the flag accepted. “The thing is to add [stars] so no one can tell there is a change in the design.”

Two years after he made it, and just one year after the 49 star flag was adopted thanks to the addition of Alaska in January, 1959, Heft’s 50 star flag was made the official U.S. flag design on July 4th, 1960 with Hawaii becoming a U.S. state on August, 1959.  This was no doubt the biggest two year boom in flag sales in U.S. history with the design changing twice during that span. 😉

In addition to designing the current flag, Heft also designed a 51 star flag, ready to be proposed should the need arise.  He designed and made it just a few weeks after completing the 50 star version.  In his 51 star flag, it has six rows alternating between nine and eight stars.  When he died, he gave this 51 star flag to Rep. Clarence Miller of Ohio to submit should a new state be added to the union.  If it’s eventually accepted, it will make Heft the first person ever to design two U.S. flags.