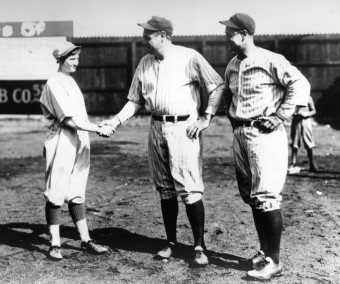 Today I found out there once was a girl who struck out Babe Ruth and Lou Gehrig in succession.

What’s even more impressive about that was neither Ruth nor Gehrig managed to even get the bat on the ball when they swung.  Ruth swung and missed twice before taking a called third strike.  Gehrig swung and missed three times, striking out on just three pitches.  Unfortunately for her, what she got for her efforts was to be promptly banned from Major and Minor league baseball by Commissioner Kenesaw Mountain Landis.

The woman was Virnett Beatrice “Jackie” Mitchell, one of the first female professional baseball players in history.  Mitchell’s baseball life started out about the same time she was old enough to pick up a ball.  Her father initially taught her to play baseball, but she got more instruction from a soon to be famous neighbor.  Seeing her interest in the game and learning of her dream to someday play in the Major Leagues, her neighbor, minor leaguer (and future MLB Hall of Famer and the greatest strikeout pitcher of his era), Dazzy Vance, taught her a few tricks, including supposedly how to throw what would become her signature pitch, a devastating sinker.

Fast forward to the age of 17 and Mitchell was making a name for herself playing around with various teams, including striking out nine consecutive batters at one point. She drew the attention of Joe Engle, owner of the Chattanooga Lookouts, while she was attending a baseball school’s pitching camp in Atlanta, Georgia in March of 1931.  He spotted her and signed her to a contract to play for the New York Yankee’s AA minor league baseball club, the Lookouts.  It was while with the Lookouts that she got a chance to face off with the game’s best.

She uses an odd, side-armed delivery, and puts both speed and curve on the ball. Her greatest asset, however, is control. She can place the ball where she pleases, and her knack at guessing the weakness of a batter is uncanny …. She doesn’t hope to enter the big show this season, but she believes that with careful training she may soon be the first woman to pitch in the big leagues.

After the previously scheduled exhibition game was rained out, on April 2, 1931, Mitchell got her chance in front of 4,000 spectators, though few saw her as anything but a side-show.

The Yankees will meet a club here that has a girl pitcher named Jackie Mitchell, who has a swell change of pace and swings a mean lipstick. I suppose that in the next town the Yankees enter they will find a squad that has a female impersonator in left field, a sword swallower at short, and a trained seal behind the plate. Times in the South are not only tough but silly.”  The New York Daily News, April 2, 1931

The starting pitcher of the day was former Cardinal and Tiger, Clyde Barfoot.  He was removed after just two batters after giving up a double to Earle Combs and a single to Lyn Larry. In came the lefty Mitchell, whose extreme side arm delivery made it particularly hard for lefties to hit off of her.  The first batter she faced was none other than the Sultan of Swat himself, Babe Ruth.  The first pitch she threw him was high for a ball.  The next two, though, Ruth swung and missed at.  She then threw a sinker low and away that caught the edge of the strike-zone, which he took for strike three.  He reportedly had a few choice words for the umpire while walking away that were “not meant for a lady’s ears”, giving  his thoughts on the pitch being called a strike.

Next up was “Iron Horse” Lou Gehrig.  She didn’t mess around with him, throwing him three consecutive sinkers, with him swinging and missing at every one.  The next batter, Tony Lazzari, fared better, though he didn’t manage a hit.  Instead, Mitchell ended up walking him, at which point she was pulled from the game.  The Yankees would go on to win 14-4.

After the game, Ruth stated, “I don’t know what’s going to happen if they begin to let women in baseball. Of course, they will never make good. Why? Because they are too delicate. It would kill them to play ball every day.”

Apparently Commissioner Landis felt the same way.  Within a few days, he officially voided her contract and banned her from Major and Minor league baseball, stating that baseball was “too strenuous” for women to play (though “The Queen of Baseball”, Lizzie “Spike” Murphy, should have given him the notion that this wasn’t true with her 17 year illustrious baseball career; more on her in the Bonus Facts below).  Despite this individual banning, Major League Baseball wouldn’t officially ban women until June of 1952, a ban that stood for 40 years, until it was repealed when the Chicago White Sox drafted Carey Schueler in the 43 round of the draft for the 1993 season.

Not everyone was quite so down on Mitchell’s efforts.  The New York Times had this to say after her performance against Ruth and Gehrig:

Cynics may contend that on the diamond as elsewhere it is place aux dames. Perhaps Miss Jackie hasn’t quite enough on the ball yet to bewilder Ruth and Gehrig in a serious game. But there are no such sluggers in the Southern Association, and she may win laurels this season which cannot be ascribed to mere gallantry. The prospect grows gloomier for misogynists.

Of course, she was never given the chance to show what she could develop into against the world’s best, so no such gloomy prospect arose.  After being unjustly kicked off the Yankee’s AA farm club, Mitchell continued her professional career playing on various barnstorming teams, including the famed “House of David” team, famous for their long beards (Mitchell would sometimes wear a fake beard to match them).  She quit baseball at the age of 23, though, after becoming fed up with people ignoring the fact that she was a genuinely good lefty pitcher, and instead treating her like a side-show, including once being asked to pitch from the back of a donkey in a match.