In the Two Towers’ Scene Where Viggo Mortensen Kicks the Helmet by the Pyre, Mortensen’s Scream was Genuine as He Broke Two Toes When He Kicked It 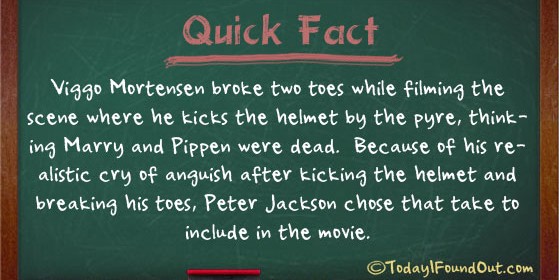 Viggo Mortensen broke two toes while filming the scene where he kicks the helmet by the pyre, thinking Marry and Pippen were dead.  Because of his realistic cry of anguish after kicking the helmet and breaking his toes, Peter Jackson chose that take to include in the movie. Reference