Text Version: President Thomas Jefferson was never a fan of formal affairs, and was often reported to have worn his pajamas while meeting with Foreign dignitaries. On one such occasion, when meeting with British Minister to the U.S., Andrew Merry, he wore his PJ’s. Needless to say, Andrew Merry was not amused and he was later quoted as saying, “I, […]

END_OF_DOCUMENT_TOKEN_TO_BE_REPLACED 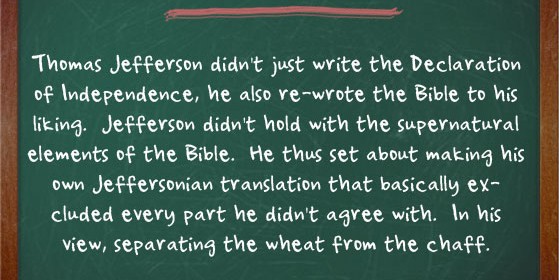 Thomas Jefferson didn’t just write the Declaration of Independence, he also re-wrote the Bible to his liking.  Jefferson didn’t hold with the supernatural elements of the Bible.  He thus set about making his own Jeffersonian translation that basically excluded every part he didn’t agree with.  In his view, separating the wheat from the chaff. Reference