The “Seuss” in Dr. Seuss is Supposed to Be Pronounced “Zoice” 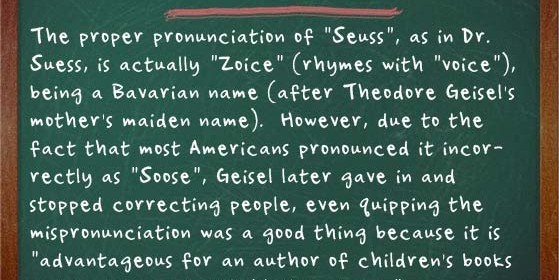 The proper pronunciation of “Seuss”, as in Dr. Suess, is actually “Zoice” (rhymes with “voice”), being a Bavarian name (after Theodore Geisel’s mother’s maiden name).  However, due to the fact that most Americans pronounced it incorrectly as “Soose”, Geisel later gave in and stopped correcting people, even quipping the mispronunciation was a good thing because it is “advantageous for an […]