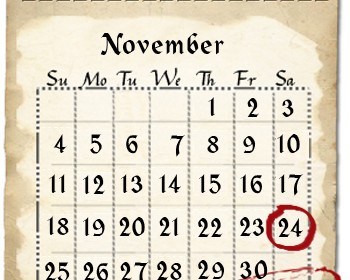 On this day in history, November 24th… 1859: British naturalist Charles Darwin published ‘On the Origin of Species by Means of Natural Selection, or the Preservation of Favoured Races in the Struggle for Life‘, more popularly known as simply “On the Origin of Species”. Darwin had already been working on his theory of “natural selection” since 1938, as the idea […]

END_OF_DOCUMENT_TOKEN_TO_BE_REPLACED

November 24: A Man Calling Himself Dan Cooper Hijacks a Plane, Collects His Ransom, then Parachutes from it and is Never Heard from Again

This Day In History: November 24, 1971 An unidentified man referred to as D.B. Cooper hijacked a Boeing 727 airplane between Portland, Oregon and Seattle, Washington.   Cooper bought a one-way ticket on a Northwest Orient Airlines, Flight 305 to Seattle, Washington leaving Portland, Oregon at 2:50 p.m.  He brought with him aboard the plane a black suit-case supposedly containing a […]