April 30, 2020 Scott
Katie O/ asks: How much caffeine would someone have to drink to be fatal? 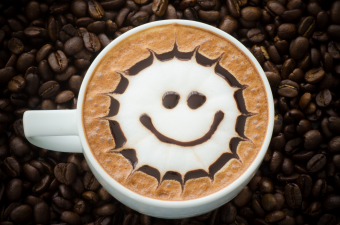 There have been numerous deaths attributed to excessive caffeine ingestion. So if you happen to be a person who loves coffee and energy drinks, you might want to know approximately what amount you should avoid drinking on a given day. So how much caffeine would it take to kill you?

Well, there are several factors that make this a tricky question to answer. For example, not everyone reacts the same way to caffeine. People also become tolerant to it and so the effects can be different from person to person. Lastly, there would be no respectable researcher who would dare perform a study on humans if the goal of that study is death to the person. Thus, as you might expect, we couldn’t find any studies that show what amount of caffeine would definitively kill your average human. But that’s not very interesting, so let’s dig a little deeper, shall we?

First, we went ahead and gathered 100 volunteers who were tired of living, along with some who we just found on the streets and figured they should have been staying quarantined, so what would happen next in our study is really on them…

But more seriously, it turns out there are less ethically questionable studies that have allowed doctors to understand what’s going on inside the body in caffeine overdoses and approximately what dose would prove fatal for the average person. So while the exact dose is almost impossible to answer for a given individual, we can say for sure a few things, like that the highest caffeine dose ever known to be ingested by someone who survived was around 100 grams.

Lesser doses that are generally thought to put an adult at high risk of death typically range from about 5-10 grams ingested in a short period, which is still an awful lot of energy drinks and/or coffee, though there are certain diet pills that can easily get you over that amount in just a handful of pills.

Of course, people ingesting significantly lesser doses have had death attributed to caffeine overdose. That said, others survive where you’d think they wouldn’t, such as one medical report looking at the case of an unnamed one year old girl who ingested some of her mother’s diet pills. The total dose of caffeine to the one year old was approximately 3 grams.

While said baby did have significant complications, including heart issues and seizures in the immediate aftermath, she survived the incident and did not seem to suffer from any long term issues. Noteworthy here is that due to her tiny size, the caffeine concentration in her system ended up being the second highest every documented in someone who survived the event.

Yet another research paper we looked at documented the case of a 16 year old boy who ingested around 6-8 grams of caffeine and also managed to survive, despite a number of immediate medical complications as a result of the caffeine.

So basically, there are a myriad of factors at play here, but as for a definitive dose that would kill most people, it turns out when talking cups of coffee or energy drinks, it’s a huge amount in most people, with some exceptions where individuals with certain heart conditions and the like might want to avoid significantly smaller doses.

As for the average Joe, most physicians and medical bodies tend to recommend avoiding ingesting more than around 500-600 mg of caffeine per day, not necessarily because you might die per se, but more because it’s likely not going to be good for you for a variety of reasons, especially if done regularly.

For reference, the average cup of coffee has in the range of 40-150mg of caffeine. For example, a Starbucks 2x Caffeine K-cup will get you a dose of around 260 mg, compared to the normally caffeinated k-cup from the same brand which has around 130 mg. Obviously if following the recommendations, you’ll want to avoid more than 2 of the 2x caffeine k-cups per day.

So this all might have you wondering how caffeine actually manages to kill?

Caffeine is one of several naturally occurring substances known as Xanthines. Xanthines are among other things, central nervous system (CNS) stimulants. Caffeine, specifically, is in over 60 known plant species. It’s the most widely consumed psychoactive substance in the world. Depending on which study you read, approximately 80-90% of the US population consumes at least 200mg per day. In low doses, it has many benefits that can help with things like pain management, water retention, alertness, and a general feeling of wellbeing, to name a few.

As with most CNS stimulants, the higher the dose, the more profound the reaction. As you consume more caffeine, the risks begin to outweigh the benefits. A person can become jittery, anxious, begin having high blood pressure, chest pain, headaches, dehydration, and unfortunately, dependence that causes withdrawals if you don’t continue consuming it. In toxic doses, caffeine can cause extremely low blood pressures, seizures, cardiac rhythm problems, and lactic acidosis.

While there appears to be some dissension among researchers as to exactly how xanthines, like caffeine, cause the reactions they do.  What is known is that they antagonize what are known as adenosine-receptors within almost every cell in the body.

Adenosine is a chemical present in every human cell. It combines with other chemicals like phosphate to create numerous compounds that help cells work properly. Those compounds need to attach to their receptors to affect cells. There are 4 main groups of adensonine receptors within the body and their effects can fall into four categories. Generally speaking, adenosine compounds help in increasing the oxygen available to cells, protect against the damage caused by a lack of oxygen, help in initiating the body’s natural anti-inflammatory responses, and help in the creation of blood vessels.

Caffeine is similar to adenosine in chemical composition, and as such, can attach to adenosine receptors not allowing adenosine compounds to perform normally. The result is CNS and cardiac stimulation, relaxation of the smooth muscles, and a diuretic action on the kidneys that can lead to dehydration.

Thus, in high levels, caffeine can be very toxic. It will bind to adenosine receptor sites known as subtypes A1 and A2. The result is seizures. In high doses, it will also inhibit an enzyme known as phosphodiesterase, while stimulating the release of neurotransmitters involved in your fight or flight nervous system. The result is extremely fast heart rates, dilation of your blood vessels causing low blood pressures, low potassium levels that can cause lethal heart rhythms, the breakdown of sugars in your liver, and an increase in your white blood cells.

If all that doesn’t seem like it’s deadly enough, those side effects will cause their own problems. Specifically, lactic acidosis will be caused by your body’s tissues not getting enough oxygen because your blood pressure is too low. The result of your seizures, low oxygen levels within your cells, and an inevitable calcium release from an area of your cells called your endoplasmic reticulum will give you what is known as rhabdomyolysis- this is a breakdown of your muscles causing a release of your muscle fibers into your bloodstream (brown pee and clogged kidneys anyone!).

If you’re thinking “I’m never drinking that nectar from Satan again”, don’t worry, those toxic reactions won’t happen at normal consumption levels. Just, again, when you start getting in excess of 500-600 mg per day for a typical adult, you’re going to start to have a bad time in many cases. And even less for the littles.

Speaking of Satan, prior to being baptized in the 16th century by Pope Clement VIII, coffee had been thought by many Catholic leaders in Europe to be Satan’s drink. Whether because of its characteristic dark color and bitter taste (both of which were the antithesis of sweet wine, which was associated with the Eucharist and Christ), its physical effects, or its roots in the Muslim world, or all three, many Catholic clerics were solidly against the beverage.

As to who first brewed the first cup of Joe isn’t known, but that hasn’t stopped many a fictitious origin story from popping up, such as the commonly repeated legend that coffee was first “discovered” in the 9th century by an Ethiopian herdsman, Kaldi who noticed that one of his goats appeared to be particularly frolicsome after consuming some red coffee berries. Giving it a go himself, he soon felt more upbeat. Energized, he relayed his discovery to his neighbors and coffee consumption was born.

However it really came to be discovered as a stimulant, over time, coffee became popular throughout Ethiopia, where it was said that warriors of the Galla tribe mixed it with butter and ate it before going into battle. Eventually, by the 12th century Arab traders returning to what is now Yemen from Ethiopia brought coffee with them and learned to cultivate the plant. By this point, the beans were being transformed into a drink (qahwa or kahwah) by means of boiling.

In the 15th century, Ottoman Turks brought coffee with them when they conquered Constantinople (Kostantiniyye or al-Qustantiniyah). At this same time, the Mufti of Aden, who had been suffering with an unidentified illness and was cured after drinking coffee for the first time, touted its beneficial qualities, which contributed to its popularity throughout the Muslim world.

Also in the 15th century, the first coffee houses (Kaveh Kanes) began appearing in Mecca and Constantinople, and like today, they were used for not only drinking coffee, but socializing as well.

By the end of the 16th century, coffee was found in Venice, and by the turn of the 17th century, Catholic Church leaders were becoming suspicious of coffee and the effect it had on the local populace. Deciding it must be Satan’s drink, many local clergy beseeched the pope, asking him to prohibit its consumption.

Trying it for himself, Pope Clement VIII (1536-1605) found it agreeable, and demonstrating a gift for diplomacy, declared in 1600:

“Why, this Satan’s drink is so delicious that it would be a pity to let the infidels have exclusive use of it. We shall cheat Satan by baptizing it.”

With the pope’s blessing and its natural addictive qualities, coffee soon spread across Europe.