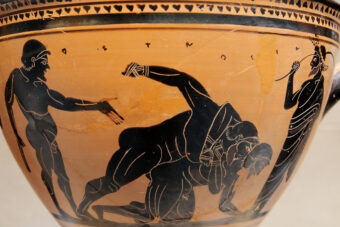 The ancient Olympics are littered with spectacular stories of athleticism and peculiar characters, like Melankomas of Caria, an ancient boxer who won several Olympic wreaths by reportedly doing nothing but avoid his opponents punches until they gave up. Perhaps the most bizarre Olympic story of all, however, is that of Arrichion of Phigalia, who once won an Olympic wreath despite being dead when he defeated his opponent.

Arrichion, sometimes spelled as Arrhachion or Arrachion, was a practitioner of pankration, an ancient and rather brutal sport that could be regarded as a precursor to modern mixed martial arts, in that it melded together and incorporated elements from two fighting styles: mainly boxing and wrestling, both of which were also ancient Olympic events.

As for the name of the sport, this derives from the Ancient Greek words “Pan” and “Kratos” which translate to “All” and “Power” respectively, meaning the word “pankratiast” can roughly be understood to mean “the one who has power”. More literally, the word pankration translates simply to “All of might” alluding to the fact one needs all of their strength to win a pankration battle.

Under the rules of pankration, the only thing besides biting that was expressly forbidden during a fight was the gouging of an opponent’s eyes or aiming specifically for the groin (except in Sparta where everything was allowed, which is perhaps why they were apparently largely barred from competing at this event during the Olympics). But outside of that, every other kind of punch, kick and hold was allowed, upto and including intentionally breaking an opponent’s fingers- a technique favoured by the pankratiast Leontiskos of Messene, who achieved an impressive number of victories by using that as his primary tactic.

According to one ancient legend, pankration was invented by Hercules during his mythical battle with the Nemean Lion, explaining why so many pieces of art depict the demi-god grasping the giant feline in a headlock. Other legends attribute the creation of the sport to the hero Theseus, who supposedly used it to subdue the minotaur.

Historians are divided on the sport’s actual origins. However, we do know that it was first introduced to the Olympics in 648 BC, whereupon it quickly became the most popular sport of the ancient games.

Beyond, of course, the good family fun aspect of watching a couple of guys beating the crap out of each other, the popularity of pankration with ancient people over other similar sports is largely attributed to them believing that pankration represented “the ultimate test in strength and technique”. This differentiated it from boxing and wrestling of the age, which tended to be won by whichever man was biggest, with skill a secondary factor unless the two men were more or less in the same league of one another in size.

This trend is no better typified than by the wrestler known as Milo of Croton who was able to dominate the ancient wrestling world for two decades by being too big for any of his opponents to grab, lift, or push over. Because the main goal of ancient wrestling was to knock your opponent over three times, none of Milo’s opponents could score a point against him. As for him, he would simply grab his foe in a bearhug and violently slam them to the ground. Amusingly, Milo was eventually defeated when a young wrestler called Timasitheus did nothing but run in circles away from him until Milo reportedly fainted from exhaustion.

Similarly, boxing matches were invariably won by whichever man hit hardest and both boxers could, if they wanted to, even agree to settle the match by exchanging unguarded blows until one of them couldn’t take it anymore. An exception to this is the aforementioned Melonkomas, who focussed his efforts on defense rather than offense.

In contrast to this, with pankration, due to the fact that virtually any technique was allowed and that the only condition for losing was “giving up”, this sport tended to play host to more exciting (read: violent) matches that more frequently ended in crowd-pleasing upsets and underdog moments.

But we really should get back to Arrichion, because his story really is kind of amazing. Already a two time winner of the pankration, Arrichion was looking for a three-peat in the 564 BC games, and entered those games as the firm favourite. However, during the final bout of the event, Arrichion was caught in a vice-like chokehold by his opponent, from which it appeared there was no escape.

What happened next depends largely on which source you consult, but the general story, outlined by Greek sophist Philostratus is as follows:

Accordingly the antagonist of Arrichion, having already clinched him around the middle, thought to kill him; already he had wound his forearm about the other’s throat to shut off the breathing, while, pressing his legs on the groins and winding his feet one inside each knee of his adversary, he forestalled Arrichion’s resistance by choking him till the sleep of death thus induced began to creep over his senses. But in relaxing the tension of his legs he failed to forestall the scheme of Arrichion; for the latter kicked back with the sole of his right foot (as the result of which his right side was imperiled since now his knee was hanging unsupported), then with his groin he holds his adversary tight till he can no longer resist, and, throwing his weight down toward the left while he locks the latter’s foot tightly inside his own knee, by this violent outward thrust he wrenches the ankle from its socket.

Regardless of the exact details, the kick caused his opponent to collapse in agony and give up. When officials went to help Arrichion up and congratulate him on his victory, they made the startling discovery that he was dead, having broken his neck. It is generally thought he’d badly twisted his neck while leaning into the kick that broke the chokehold, causing his opponent to inadvertently twist it too far when he recoiled in pain.

However, despite being dead, under the rules of the games, when his opponent gave up, Arrichion was automatically declared the winner and, thus, successfully defended his title. While presumably not exactly the way he would have preferred to win, on the plus side for Arrichion, had he won in a more traditional way, nobody would remember him today. But as it stands, well over 2,000 years later, humans are still talking about his legendary final match. On the flipside, nobody remembers the name of his opponent that day.